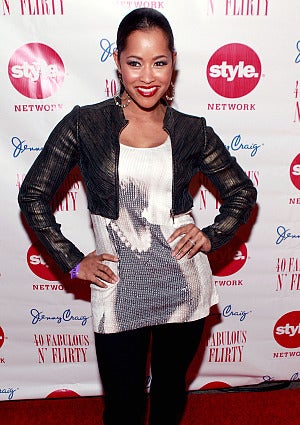 Women on the Move founder Leslie Harris has added a little star power to the breast cancer awareness cause by tapping Real Housewives of Atlanta diva Lisa Wu-Hartwell to host the inaugural “Unveil Your Pink” charity auction to benefit Susan G. Komen For The Cure this weekend. The benefit will feature over 20 A-list items up for auction, including an autographed copy of Michael Jackson’s “Thriller” and tickets to the Oprah Winfrey Show. Women on the Move is Harris’ initiative to create a network that highlights the positive experiences of women and their many passions. Harris and Hartwell recently spoke with ESSENCE.com about the need for breast cancer awareness, particularly in for African American women and the importance of women supporting each other. ESSENCE.com: First of all, you’ve got some serious items on auction, like an autographed Michael Jackson album, and tickets to Oprah? LESLIE HARRIS: [laughs] I’m not giving up my trade secrets but here’s the thing: when you have a cause that’s as good as breast cancer, people go above and beyond to be a part of it. As a matter of fact, I’m gonna bid on those Oprah tickets myself. LISA WU–HARTWELL: [laughs] She has an autographed Rolling Stones guitar and an internship at Versace on auction. That’s crazy. ESSENCE.com: Lisa, how did you get involved with Leslie’s initiative? WU-HARTWELL: Leslie reached out to Tami Reed, who’s a very good friend of mine. Of course the show I’m on has so much drama, but Leslie’s whole movement is wonderful and I love that people can encourage and build each other up through it. ESSENCE.com: Leslie, can you tell us what Women on the Move is all about? HARRIS: The organization is about about positivity. I know that’s a general term but it’s about networking for positive women. They can come to Women on the Move and with 4,000 plus people in the network, they’re bound to find the information they’re looking for. The only requirement is to, first, be a female and, second, to only bring positivity. You can be from any walk of life and you share your ideas but you have to do it in a respectful, positive manner. You’ll find entrepreneurs, doctors, and lawyers–there are all kinds of women there.

ESSENCE.com: Why did you choose breast cancer as your cause? HARRIS: I chose Susan G, Komen for my first charity event because breast cancer affects African American women more than any other group. As someone whose grandmother died of breast cancer, I need to do my part by raising awareness and money. ESSENCE.com: Why do you call it ‘Unveil Your Pink?’ HARRIS: One of the things we’re going to do is have a photo showcase of some breast cancer survivors. We did a photo shoot with some survivors but they’re not going to see them until the night of the event. Pink is the color of breast cancer, so the night will be a chance for them to unveil their pink. ESSENCE.com: Lisa, what do you hope to achieve by coming on board? WU-HARTWELL: It’s sad to say this, but sometimes it takes a television show like Real Housewives of Atlanta for someone to want to hear what you have to say. When people don’t know you, they’re not going to listen. But, because they’re familiar with me, they want to hear what I have to say. Besides, it’s for a great cause. The “Unveil Your Pink” charity auction takes place this Saturday, March 20, 7pm-12am at the Boca Raton Resort and Club. More information is available at Women on the Move. Read More: