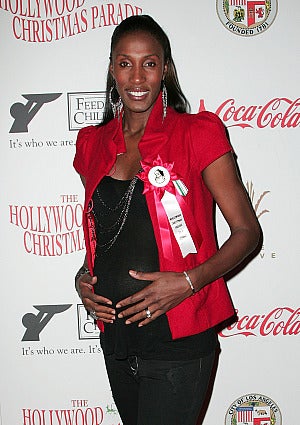 It seems motherhood is keeping Lisa Leslie-Lockwood busy since retiring from the WNBA. The former Los Angeles Sparks center gave birth to her and husband Michael’s second child together, Michael Joseph (or MJ) on Tuesday April 6, 2010. MJ joins his big sister Lauren Jolie who turns three on June 15. It was originally reported that Leslie-Lockwood was expected to deliver her son in May. The baller was most recently spotted signing copies of her book, “Don’t Let the Lipstick Fool You,” on Saturday, April 3, just three days before giving birth. In December, Leslie-Lockwood, who stands 6’5.” projected that M.J. would most likely take after his parents in the height department. “I imagine M.J. won’t be shorter than 6’6″.” At 7lbs. 13oz. 21.5inches, according to Leslie’s sister Tiffany, little MJ is showing real growth potential.  Read More: