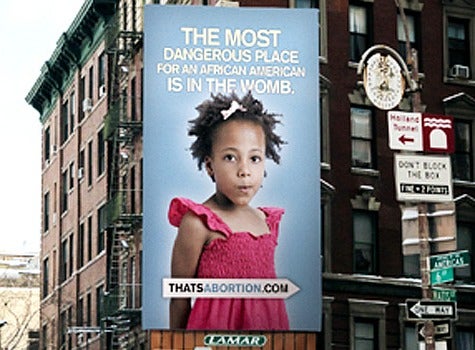 Downtown New York City dwellers were shocked yesterday when they looked up on the corner of 6th Avenue and Watts Street to see a billboard that read, “The most dangerous place for an African-American is in the womb.” Does anyone else find this offensive?

A press release from the organization responsible for the billboard, Life Always, says that its aim is to “raise public awareness of Planned Parenthood’s targeting of minority neighborhoods.”

By using the bodies of Black women as a battleground?

Planned Parenthood rebutted with its own release, calling the billboard “an offensive and condescending effort to stigmatize and shame African-American women, while attempting to discredit the work of Planned Parenthood.”

The billboard is careless and polarizing, hiding behind issues of race and sex to make a statement. It does more to “shame African-American” women than it does to “raise public awareness” about anything. Furthermore, It’s insulting to infer that we are somehow more likely to make unintentional decisions about our bodies than women of other races.

This isn’t the first assault on our reproductive organs. Remember the billboard that called Black children “endangered species”? It leaves me wanting to shout, “Hey! Leave my womb out of it!”