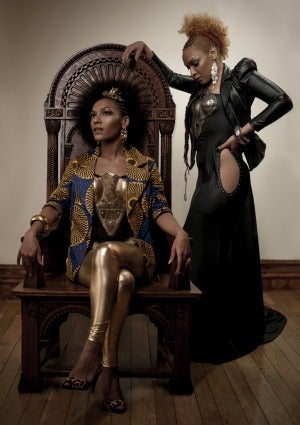 It’s been several years since Les Nubians, the soulful Grammy-nominated French duo, had you singing along to lyrics you didn’t fully understand. The (biological) sisters, who describe their sound as ‘Afropean’, are gearing up for the release of their third album, “Nu Revolution.” While their songs are recorded in both English and French, Les Nubians’ dominant language has always been music. ESSENCE.com: What is it about your music that transcends language barriers? LES NUBIANS: Some people have told us that they don’t understand our lyrics but can still feel pain, sadness or joy. That’s the power of music. We’ve been listening to Bob Marley, Michael Jackson, Prince and Stevie Wonder and weren’t English-speaking, but it didn’t cut us off from the love of music. We learned English in school and through music. For a long time we couldn’t understand a word; we just sang the melody. Actually, we just discovered that [in “Wanna Be Startin’ Somethin'”] Michael Jackson was singing “You’re a vegetable.” ESSENCE.com: Your music can be described as a fusion of hip hop, soul and R&B. On your last project with “Echos” you incorporated SLAM poetry. What’s the sound of the upcoming album, “Nu Revolution”? LES NUBIANS: It’s more upbeat than the other album. We wanted to dance and celebrate, instead of mourning. The world is sad enough. But there are still moody and intimate songs and of course there are African rhythms because they are a part of what we are. It’s something you won’t hear anywhere else but with the Nubians. ESSENCE.com: What exactly is “Nu Revolution”? LES NUBIANS: We believe in evolution and the evolution of our dreams. Revolution is also an important word — it’s Eve, the woman. We truly believe that it’s our time now. In 2010, the universe is balancing energy. It’s an important time. We wanted to create music that would accompany that movement, that change. ESSENCE.com: What’s the biggest difference between music in Europe and America? LES NUBIANS: America is a nation that has a great music history. Music is very important in the United States. In Europe, it’s more conservative. Music is not considered as much of a major art. Europe is more about writers and painters but generations are changing. The new generation is bringing more music in the European world. ESSENCE.com: When you are recording a song, what is most important in that process? LES NUBIANS: We try to stay close to our feelings. We write a lot of our music and when you’re a writer, a woman especially, you have to stay really close to your creation so that it doesn’t turn into someone else’s music. We like to create things that are inspired, not cookie cut. “Nu Revolution” comes out in March, 2011. A limited edition six-song EP is available now only online or at shows.