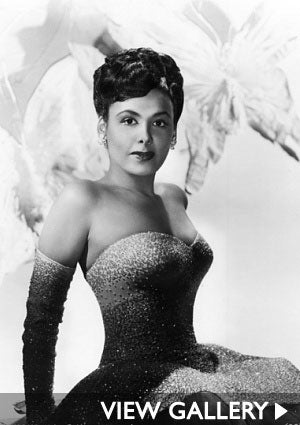 Lena Horne, the legendary singer, actress, and civil rights activist died Sunday night at the age of 92 in New York City. Horne, born in Brooklyn, got her start by singing in the Cotton Club at age 16. She went on to break boundaries by becoming the first African-American actress to be signed by a major studio in the early 1940s. Before Horne, roles for African-American actresses were limited to offensive, stereotypical characters, such as a maid. Horne proclaimed, quite famously, that she would never take such a role and battled with her studio execs about such limitations. Due to the color of her skin, she was eventually edited out of many of her movies, so as to not turn away Southern audiences. “Mississippi wanted its movies without me,” Horne said in a 1957 interview with the New York Times. “So no one bothered to put me in a movie where I talked to anybody, where some thread of the story might be broken if I were cut.” Her classic work in film includes “Cabin in the Sky” and “Stormy Weather.” Other memorable roles include Glinda the Good Witch in “The Wiz.” While her acting career would last for six decades, Horne’s true passion was her music. She eventually returned to work the nightclub circuit, as well as utilizing her celebrity as a voice for a positive cause. Horne pressed for anti-segregation laws and became a major force in the Civil Rights movement. “ESSENCE mourns the loss of Lena Horne.  With tremendous talent, striking beauty and grace, she persevered through the difficult circumstances of racial intolerance.  She not only delighted us with her talent, but inspired us with her personal calling as an advocate for civil rights.  Lena Horne is an American treasure and she lived life to the fullest with passion, purpose and responsibility.” –ESSENCE Editor-in-Chief Angela Burt-Murray Please leave your condolences below in our Comments section.