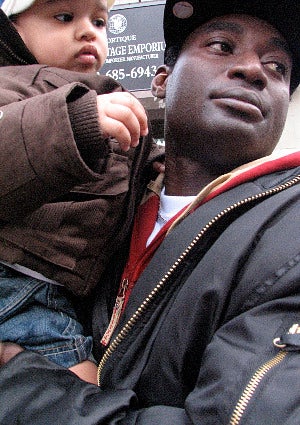 In the world of indie films, Oscar-nominated director Lee Daniels has become the standard bearer for cutting edge, gritty and provocative movies about America’s underbelly and unsung citizens. Daniels champions the people who make up the fabric of our communities, but are often the ones we overlook or ignore in our everyday, picture-perfect lives. These are not the people we socialize with or even know. Think about the single mother Leticia Musgrove played by Halle Berry in “Monster’s Ball” or the diabolical mother and grandmother Mary Jones portrayed by Mo’Nique in “Precious.” Both performances garnered Academy Awards because of their dynamic and schizophrenic personalities, and the unpredictable and never-before-seen portraits of these types of American women. This was new to cinema. Now Daniels is presenting a new film, “Prince of Broadway,” by Sean Baker (“Take Out”) that turns his lens on the Black male character. “I was a juror at the Independent Spirit Awards a few years back and we must have seen 150 movies,” Daniels recalls of the film festival-winning “Prince of Broadway.” “Unanimously, this film surfaced. I don’t know how this kid did this movie for this amount of money. He made my guerilla style of filmmaking look like a studio film. I was blown away by how he was able to beat the system.” The movie takes a look at Lucky, an illegal immigrant from Ghana who works in New York’s wholesale garment district. He is one of the guys selling counterfeit sneakers and designer handbags to tourists. He is living a good life (an apartment Uptown, a girlfriend, and a wad of cash), until a woman leaves him with a baby during work claiming it’s his son. Suddenly, Lucky is left holding the toddler and balancing his life as a single caretaker. And the tale of urban life, parenting and survival unfolds. “I love the way he went about telling this story,” says Daniels about Bakers’ technique of using non-actors, shooting in real locations, and depicting life on the streets of New York City. While Daniels didn’t write, direct or produce the movie, he presents it the same way Oprah Winfrey and Tyler Perry presented “Precious.” “When Sean asked me to present the film, I realized the power of presentation. And while I am not Oprah Winfrey, I know that I have a specific fan base in the indie world. So I knew that people would run to see this film if I said to run and see this film. I think it’s worth seeing.” “Prince of Broadway” opens today in a nationwide limited release.