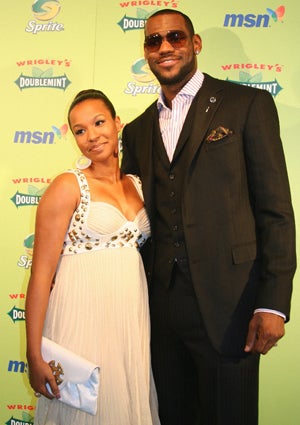 LeBron James — and team — just can’t win right now, can they? First up was the largely circulated Internet rumor about his mother (it’s too nasty, and also unfounded, to repeat here). Then there was his team, the Cleveland Cavs, losing the playoffs to the Celtics, followed by his press conference debacle announcing he was leaving his home team for Miami. That was followed by a pulled interview with ESPN.com that largely portrayed him as an oversized man-child — which at 25, he kind of is, despite being a NBA veteran and multi-millionaire. And finally, on Monday, Harper’s Bazaar released a profile of LeBron’s high school sweetheart and current girlfriend, Savannah Brinson, 24. The story was supposed to be a puff piece designed to highlight Brinson’s newest ventures; a children’s furniture line and charity focused on empowering girls. But that’s been overshadowed by LeBron referring to Savannah, also the mother of his two children, as his… um, “sidekick”.   “Like she’s reliable and convenient like the old phone?” a good friend asked after reading the story online.   “So she’s Robin to his Batman?” another bestie wondered after reading a flurry of Twitter updates about the faux pas.   I laughed at the former and cocked my head at the latter. Maybe LeBron did mean “sidekick” playfully and affectionately like Savannah is his Robin. But Robin wasn’t Batman’s equal. He didn’t even show up until the fourth installment of the ’90s Batman film series and even then, he was his lesser accomplished, not quite as good fellow who handled the little leftover tasks. He was around, but hardly essential. Hmmm. Isn’t Savannah essential? I mean, she’s raising LeBron’s children.   I thought I was over-thinking the term, applying my own biased outlook to the matter (um, I’m old school. You got two kids for a man, your title should be ‘wife’) until I looked up the definition of sidekick at Merriam-Webster.   Sidekick: function: noun “a person closely associated with another as a subordinate.”   Yikes!   Savannah and her title, got me to thinking about the importance of well, titles. Steve Harvey in Act Like a Lady Think Like a Man says what I’ve always believed: a title is important. “If a man loves you… He’s willing to profess it. He’ll give you a title after a while. You’re going to be his lady, his woman, his fiancee, his wife, his baby’s mama, something,” Harvey said on Oprah.   But sidekick??   My Twitter friends called foul: “His word choice speaks to how he views his life. It really is The LeBron Show and everyone else is supporting cast,” one commented.   Still, I wondered if we were making too much out of a title. I mean, if a man does everything he’s supposed to — loosely, protect and provide, but he doesn’t profess, i.e., give a widely recognized title of girlfriend, or better, wife, is it that big a deal?? Actions speak louder than words. Isn’t that what “they” say? And if a man’s doing everything else, that’s what matters… right?   Uh… I couldn’t even think it with a straight face. I was trying to convince myself of something I didn’t really believe for the sake of being PC. If Savannah’s okay with being called a “sidekick,” God bless her and goodnight. But me? (And apparently my girls too.)   Naaah.*     *You have to say it like “Lisa,” Eddie Murphy’s bride in “Coming to America.”       Demetria L. Lucas is the creator of ABelleinBrooklyn.com. She is currently a finalist for the Black Weblog Awards. Vote for her blog at www.blackweblogawards.com