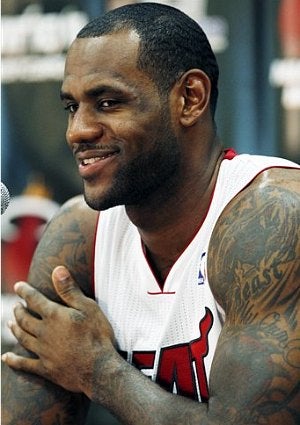 Finally expressing what has long been murmured among Black sports fans, LeBron James says he thinks race may have played a factor in the backlash against his decision to leave the Cleveland Cavaliers for the Miami Heat. CNN’s Soledad O’Brien recently asked James if he thought race played a part. “I think so, at times,” he said. “There’s always — you know, a race factor…” The issue of race has long permeated around the backlash surrounding James’ decision. Even his “Q” ratings (the industry standard for measuring an athlete’s familiarity and appeal) have plummeted since he made the transition. Recently, reacting to an open letter written by Cavaliers owner, Dan Gilbert, the Rev. Jesse Jackson says he spoke like a slave master and LeBron was his “runaway slave.” But this was the first time James had publicly acknowledged race. At a training session with the Miami Heat, the star player stood by his comments. “I’m not going to go back on my words,” he said. “I answered the question. I think people are looking too far into it. But, at the same time, sometimes it does play a part in it.”