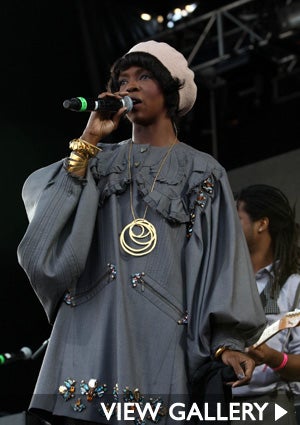 Lauryn Hill performed at the traveling hip-hop festival Rock the Bells in New York City this weekend, and some of the biggest names in the music biz were backstage cheering her on. Beyonce and Jay-Z, fresh from their Mediterranean vacation, Alicia Keys and Swizz Beatz, Mary J. Blige and Kendu Isaacs, as well as Estelle and John Legend, were all singing along to L. Boogie’s classics set. They even popped onstage during “Fugee-La” to greet the crowd. Lauryn’s return to the limelight seems more and more like a reality. A song leaked online titled “Repercussions” put Hill back on the Billboard charts for the first time in more than a decade. The song’s producer and co-writer, Dana Rivera of Boywonder Entertainment, confirms that the mysterious track is “not an outtake from the ‘Miseducation’ album, it is a work in progress.” There’s no word on whether Hill is working on a full album just yet, but we’ll take what we can get.