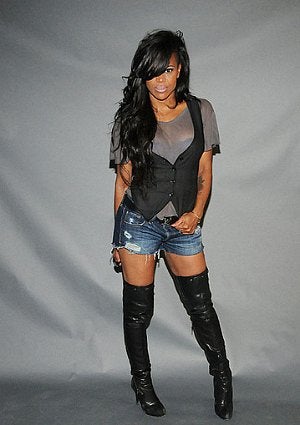 Choreographer Laurieann Gibson is the creative director behind mega-successful artists like Lady Gaga, Nicki Minaj and Katy Perry, but most of us remember her for her stint on Diddy’s “Making the Band.” This Jamaican-American Cali girl says her energetic personality is often misunderstood. “You have to have an immense amount of energy to keep Diddy inspired,” she said during a stop at the ESSENCE offices just days before she won a Best Choreography VMA for Gaga’s “Bad Romance.” She spoke with ESSENCE.com about her upcoming E! reality show and reconciling with Diddy. ESSENCE.com: You’re one busy lady these days. What’s it like to have all your artists at the top of their game? LAURIEANN GIBSON: Wow! I don’t really think about that. I think about yesterday, I think about the last step we practiced and I think about who confides in my gift. I go into every situation like it’s the first or the last one. I am incredibly grateful to God’s time and his positioning so I think it’s a reflection of what he’s doing in my life at this particular time. ESSENCE.com: You’ve spent a lot of time behind the scenes. Is your upcoming reality show on E! and “The Boom Kack” dance show on BET a chance for you to come center stage? GIBSON: I think it’s good for people to see that a person like myself exists with this gift. I came from nothing. I don’t have a famous last name, I didn’t sleep my way to the top and I’m not the cutest puppy in the patch. I’ve had every door closed and God has delivered me so I want to send the message that there’s no way the world can tell you anything is not possible. ESSENCE.com: You and Diddy are working together again? You two have a very interesting dynamic, to say the least. GIBSON: Oh my goodness, I wish it was more than friends so I could get some handbags and rings and things. We did “Making the Band” and we had the big fight. It was unfortunate that he edited my personality with such a negative connotation. People mistake my energy for being a diva, but it isn’t; it’s the passion that I have. The type of woman that I represent I think he ultimately respects and adores and is glad that I exist. Now our friendship has flourished into that of a brother and sister — family. Gibson’s untitled reality show will premiere on E! later this year. “The Boom Kack” show premieres next year on BET.