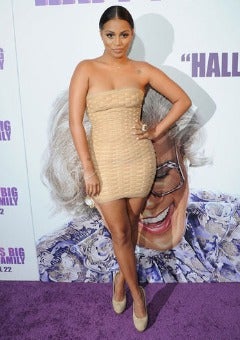 What do women really want in relationships? On TV, we’ve seen everyone from Carrie Bradshaw to Joan Clayton work themselves into a knot trying to figure this out. On VH1’s new romantic comedy series, “Single Ladies” (premiering tonight), starring Lisa Raye and Stacey Dash, among others, Lauren London, who plays the recurring role of Shelly, does her part to answer this question.

ESSENCE.com spoke to London about the role, her next moves, and why she enjoys being single – for now.

ESSENCE.COM: Tell us about your role on the show, and how you got involved.
LONDON: I actually auditioned  for the role of Val, Stacy Dash’s character. When Stacy Dash was given the part they called me and said they actually wrote in a character for me because they really liked my audition, and wanted me to be a part of the show as a guest starring role as Shelly, the girlfriend of Stacy Dash’s ex-boyfriend. She’s young and free-spirited, and she’s brought in to be a light on the show.

She isn’t naive, but in her early twenties she’ just not as hurt as other women are in say, their later thirties. So the guy, (Stacy Dash’s ex) is just one of her many conquests. She’s very confident and not to insecure about much.

ESSENCE.COM: Would you say your similar to your character?
LONDON: I would say I’m more similar to Val. She’s an independent woman, and knows what she’s looking for in a relationship. She has her boundaries and standards set — I’m more like that. A good head on my shoulders. Although Val has the most drama on the show, that’s the biggest difference because my life is pretty calm right now.

ESSENCE.COM: What messages does the show put out there about being single?
LONDON: That there are many possibilities. So many people think being single is the end of something, but it’s really a beginning — a good beginning. People should accept being single, because those are the moments you can really focus on yourself, and learning who you are .  Then when you get in a relationship, you will be stronger and have a little bit more self-awareness, self-love, and the other ingredients for a healthy relationship.

ESSENCE.COM: Are you single? Is it hard being single.
LONDON: I like being in relationship because of the comfort it provides. However, right now, in my life being a mother, and working on my career – I’m cool with where I’m at, because I know it’s not always where I’m going to be, so I’m enjoying my single experience. Is being single hard? It depends where your mind is. If you are focused, being single is an enjoyable experience, but if you hate being alone you’ll hate being single. I think it depends on the individual are where they are in life.

ESSENCE.COM: You were away from us for a while. What have you learned and who have you learned from during your time off?
LONDON: I really enjoyed working with Lisa Raye. She’s a single mother as well and she handles her business. I’ve always been cautious with the type of stuff I do, but I’m still in acting school, because now I want characters and roles with more depth. That’s what I’m aiming for. I want my characters to tell even greater story, roles that will help me and other women learn more about my self and who we are.