By clicking Sign Up, you agree to our Terms of Use and that you have read our Privacy Policy
Skip to content
By Toni Akindele · Updated October 27, 2020
Following your passion, for some, is not an easy call to obey, but for Nigerian artist, Laolu Senbajo it certainly paid off. Shadowing his father’s footsteps, Senbajo, 34, began his career as a human rights lawyer before answering his true calling as an artist. His work’s first high-profile platform, Nike, featured his painting on limited edition Air Max. The sneakers debuted only a month ago, and just Sunday night, Senbajo’s Sacred Art of the Ori made its onscreen debut alongside Beyoncé in her conceptual short film that premiered on HBO, Lemonade. Beyhive Members Rejoice, Beyoncé Just Dropped Her Sixth Studio Album ‘Lemonade’ Bopping in a bus to Beyoncé’s track “Sorry,” are body-paint adorned dancers who act as Senbajo’s canvas. But he’s not a makeup artist, he clarifies with ESSENCE candidly over the phone, “I’ve got all these followers who think I’m [solely] a body artist. They ask me all these questions about body art and makeup,” he explains. “I have to say I’m not a makeup artist. I’m not going to do any eye shadow or all these things… I’m an artist, I just paint on human bodies.” 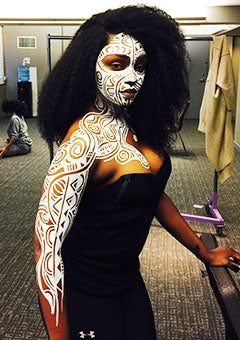 Having only moved to the states three years ago, the now Brooklyn based artist talks about his time in New Orleans, his creative process in Lemonade, and exactly what Beyoncé thinks of his work. Did Beyoncé find you through your work with Nike? Beyoncé actually happened before Nike.She handpicked all the people that worked on that project – all the talent, fresh, people who were doing something new or innovating in that respect, and putting them together on that project. I couldn’t talk about it at all. I’ve been walking out and about with this big secret and this big smile on my face. Did I tell you how I met her on set? She called out to me, but I had no idea she was talking to me, because I was like there’s no way she knows me, there’s no way she’d recognize me. Then, she walked behind me and she tapped me. I was just like, ‘Oh my God. This is just –‘ Then she was thanking me for coming on project, and how it’s a pleasure to have me, just thanking me. In my head I’m like, ‘Why are you thanking me? I should be thanking you.’ She told me what I did with the body art, what I did with my shoes and jackets was so unreal. 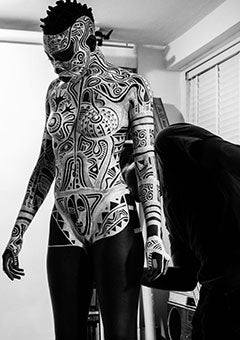 On set with Beyonce's dancers.

Still Wondering Why Beyoncé Named Her New Album ‘Lemonade’? Here’s Your Answer Did you have any idea what Lemonade was going to be about? No, I didn’t. The whole story was telling Bey’s story in the faces of the dancers and women. There’s this very, very, I don’t know, strong emotion, that celebrates women, and brings out a lot of things about culture, roots – about where [Beyonce’s] from, being African-American, being from Africa. And me, actually being from Africa, I was so not afraid to show my roots in this. A lot of the patterns I put on the dancers are very, very traditional to me. I call the style Afromysterics, which means mystery of the African thought pattern. The music itself is like mystery, if you look at it very well. It’s very mysterious, something you really don’t understand at first, and then after listening to the song over and over again, you begin to get the message. You have to work it out. People are going to talk about this video. It’s like a masterpiece. What’s the symbolism of your work and how does it connect to Lemonade? The director was amazing. We sat down and looked at everything—the dancers, the dance moves, and how I could interpret them with my own eye. I call it “The Sacred Art of the Ori.” I sit down with my knees on the canvas, and I try to interpret the essence. Your Ori is pretty much your importance. It’s like your whole being. Looking at them dance, the way they moved the muscles, the face, the expressions to music, helped me determine the detail and the line – what the face marks would be. What was it like working with Beyoncé? What I connect with about her is her thoroughness. I’m pretty much like that in a way; like a perfectionist. She’s the first person to get on the set and she’s the last person to leave. She’s doing everything repeatedly. She’s like you can’t afford not to be on your best. You can see she’s at her best, so everybody is working real hard around her. Everyone’s very charged when she’s there. Very charged. She’s awesome. When you see somebody at that level doing that, you’re like, ‘wow.’ I got back to New York super charged, extra energy. I know she’s super, super busy and yet, she commits so much to her craft. Squeezing the Lemonade from Beyonce’s Visual Masterpiece See more of Laolu’s work here. WANT MORE FROM ESSENCE? Subscribe to our daily newsletter for the latest in hair, beauty, style and celebrity news.