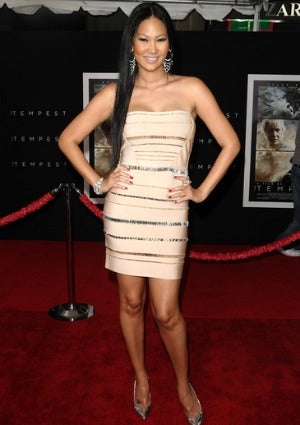 Making fabulosity part of your daily routine is no easy task — unless you’re Kimora Lee Simmons. Year after year we’ve gotten to know Kimora better thanks to her hit show “Kimora: LIfe in the Fab Lane.” We’ve watched her handle fashion disasters, parent on the spot, and juggle multiple businesses — all in five-inch stilettos.

As the former figure head of the Baby Phat empire, she’s gearing up for the fifth season of “Kimora Life in the Fab Lane.” The queen of all things glitz and glam shared what we can expect this season five and saying goodbye to Baby Phat.

ESSENCE.com: This is your fifth season of “Kimora, Life in the Fab Lane.” How are you able to keep things so fresh and entertaining?
KIMORA LEE SIMMONS: I think that’s the one good thing about reality, it’s not a movie, it’s not a sitcom — it’s about what’s actually going on. That’s the least part of my worries, how to keep it fresh, it’s my real life. I feel like I have a core audience and they’ve seen me from 10 years old to being discovered by Karl Lagerfeld, they’ve seen me become a big model, they’ve seen me have kids, they’ve seen me get married.

My life has evolved and I feel like my fans grow watching me, so I feel like they grow on their own. It’s not hard to keep it fresh at all — it’s life! I have my second husband, I have three children, I have a great relationship with my ex [Russell Simmons]. I started a huge business with Baby Phat, I’m no longer there, every day of my life is a great adventure, honey. How to edit it all into an hour-long show is the question.

ESSENCE.com: What happened with you and Baby Phat?
SIMMONS: I’ve moved on to pursue other things. You’ll see me going on with my other businesses, I have KLS, I have Hello Kitty, I have Kouture at Macy’s, I have Fabulosity, I’m developing a skin care line, I’m going on HSN. I’m working on my sixth fragrance, my life goes on, but it was an adjustment in terms of offices and staff and life.

ESSENCE.com: How did you feel about that?
SIMMONS: I think it was hard for me. As a human being it was monumental for me because I nurtured that brand for almost 15 years. I discovered it. I created that brand under Russell’s umbrella, which was Phat Farm. I have catered to these women, they’ve grown up for me. It was a huge transition. But I’m up and going and I’m feeling great and I’m very very happy and I feel free. I’m at the next level of my life, I’m in my 30s… our needs change, in terms of style, in terms of fashion, in terms of work, it’s like an evolution for me as well as my fans.

ESSENCE.com: How are you able to balance three kids, a career and a husband while filming a TV show?
SIMMONS: By the grace of God! I have help, but I’m very hands-on in everything I do. I do normal stuff, I’m a normal mother and I’m a very hardworking woman and I have hundreds of products and many businesses that I do. I just try to juggle everything, try to prioritize what’s really important. For me it’s always God, family, and then my work.

ESSENCE.com: Since you’re so busy, what do you do for Kimora time?
SIMMONS: I’m on the treadmill. I lost 20 pounds recently! I don’t get it because I read these blogs and every time they’re being nice to me it’s a compliment. People say, “She looks great because she was a little chubby before,” but I think, ‘Damn, my baby is only one.’ Did everybody forget that? It’s not like I got fat overnight — I brought a life into the world. It’s okay for a woman to carry some curves around. Even thought I lost 20 pounds, I’m nobody’s size four. That’s not in my vocabulary at all. You see that on the show, too, if I gain or lose, it works into my life. I try not to be neurotic, I try to create and present healthy body image.

Here’s a sneak peek of “Kimora: Life in the Fab Lane”