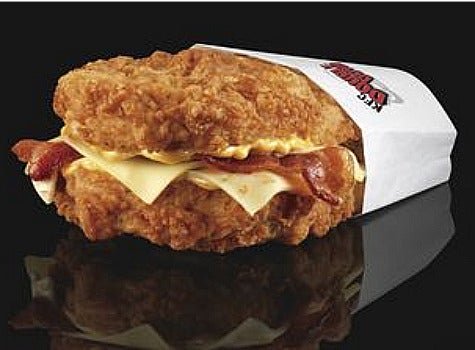 KFC’s new bun-less Double Down is here and health experts are calling the 540-calorie sandwich–which replaces bread with two pieces of fried chicken, holding two slices of Monterey Jack and pepper jack cheese, two strips of bacon and a creamy sauce–a heart attack waiting to happen. “This is not a healthy choice,” Walter Willett, chairman of the nutrition department at the Harvard School of Public Health, told Associated Press. The Double Down is running in the same caloric class as McDonald’s Big Mac or a large order of fries from Burger King. Furthermore with 1380 milligrams of sodium, the Double Down nearly covers the total recommended milligrams of sodium per day (1500). While the sandwich is also available with grilled chicken instead of fried the adjustment doesn’t yield any major health gains–reducing the calories to 460 and increasing the sodium to 1430 milligrams.  KFC spokesperson Rick Maynard argues that while the Double Down is “more indulgent,” the fast food chain does offer lower-calorie items. “That’s one of the things that make our restaurants popular,” he told the Associated Press. “We have something for everyone.” High fast food chain density in Black neighborhoods could mean that many of us will encounter a higher degree of marketing for the bun-less sandwich than others. Meanwhile, one could argue that “everyone” should seer clear of the Double Down.    Does KFC have a responsibility to its patrons to stay within reasonable health boundaries? Does the Double Down cross those boundaries? Do you want to try it? Read More: