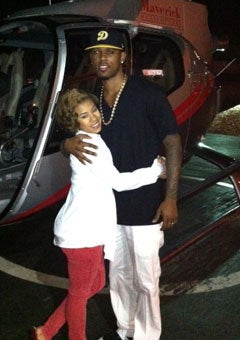 For quite some time we’ve been waiting for Keyshia Cole and her fiance Daniel Gibson to jump the broom, and last night the couple finally made that leap. According to Keyshia and Daniel’s Twitter accounts, the lovebirds said “I Do” in Cleveland, Ohio.

“So the world ain’t end. Not yet… But a brand new world for me and my family has just begun! #Blessed Wedding Pics coming 2morrow! B E Z,” Daniel tweeted at 2:30 A.M.

It wasn’t long before the couple’s friends began to chime in wish them marriage bliss. “Congratulations to @keyshiacole Wishing u guys a lifetime of happiness,” tweeted Monica.

According to SandraRose.com wedding photos have yet to surface, however Daniel tweeted this photo (left) just before the couple boarded their helicopter that flew them to their honeymoon destination. How romantic!

Join us in congratulating Mr. and Mrs. Daniel Gibson on a lifetime of happiness and love!