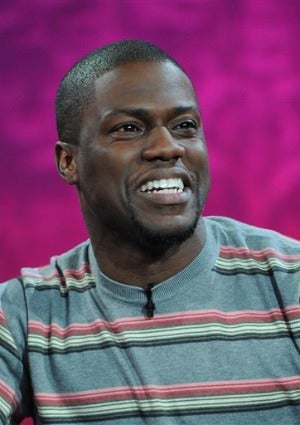 Kevin Hart might be funny but he ain’t no joke. The five foot-something Philly native has become one of the most visible comedians on the circuit. The star of “Soul Plane” and several televised standup specials like “Seriously Funny,” Hart is busy these days making folks LOL at his “Laugh at My Pain” tour, and playing Louis, a male nurse in the comedy trilogy “Little Fockers” (in theaters today).  ESSENCE.com sat down with the former shoe salesman to discuss “Little Fockers,” his “family unit” and his measurements… ESSENCE.com: In your stand-up specials you joke a lot about your kids. How is the “family unit” looking these days? KEVIN HART: Let me tell you something about the family unit.They love it because that’s how daddy’s feeding the family. Nobody minds. Everybody’s okay with me poking fun at them. At the end of the day, it’s all in fun. Is there truth to it? Of course. All comedy comes from a real place. ESSENCE.com: Fill in the blank: Every good joke should… HART: End with a clap. ESSENCE.com: What’s not funny? HART: That’s hard for me because I find humor in anything. I’ve found humor in some of the darkest things in my life at some point. I believe laughter heals all wounds. But you don’t know that if you don’t first acknowledge the wound. When you laugh about what you’re hurt about, it’s better. ESSENCE.com: Tell us about your role in “Little Fockers?” HART: I play a nurse named Louis. He’s basically who Ben Stiller used to be. It’s a cameo, about three scenes. Ben Stiller used to be a low level nurse and now he’s a little higher up in the chain. In the movie, I’m not really respected and I’m thrown the low level work and Ben is a little more patient with me and understanding of my situation. ESSENCE.com: How tall are you really? HART: I’m going to give you the honest number. It’s 5’5″. ESSENCE.com: What are you buying yourself for Christmas? HART: I just bought myself a 2011 Range Rover, Supercharger. I’m not the Bugatti or diamond guy. I keep it pretty simple. I don’t really do too many big crazy things. Catch Kevin Hart in “Little Fockers” in theaters today.