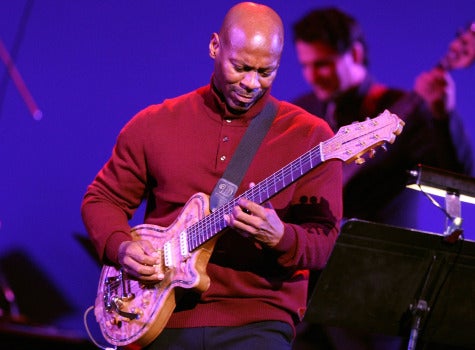 Last night, Kevin Eubanks confirmed a rumor that’s been floating around Hollywood circles for months. In just six short weeks, the beloved bandleader will bid farewell to his “Tonight Show” crew as well as scores of late-night television viewers. Today, we gathered up a few fun facts about the man who’s been chuckling along with Jay for the past 18 years. What was Eubanks’ first professional gig? A fashion show in his Philadelphia hometown. Eubanks joined the band in 1992. Whom did he replace when he took over as bandleader in 1995?  Branford Marsalis. Eubanks is down with hip-hop, but considers himself old school. Who is his top pick? Public Enemy. Aside from his musical accomplishments, of which award is he most proud? PETA’s Sexiest Vegetarian Man Award [2007]. What’s the first thing he’s going to do once he wraps the show? “After 18 years of playing America into commercials, I’m going to go somewhere where I can finish a song. I’ve got to finish a song!” Read more: Spring TV Lineup: What To Watch