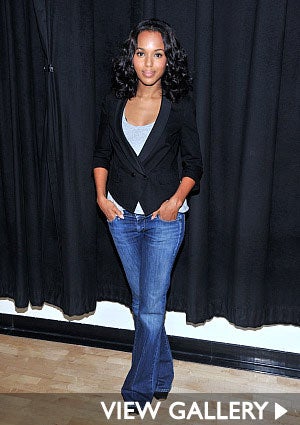 Kerry Washington dished about her love scenes with Anthony Mackie in the pair’s upcoming independent film “Night Catches Us,” directed by first-time feature-maker Tanya Hamilton, set to premiere at the Sundance Film Festival on January 23.

“I will tell you this,” Kerry told E!, “doing our second love scene was no easier than doing the first one,” referring to her first love scene with Mackie in Spike Lee’s “She Hate Me”. “It was even more awkward the second time around.”

Set in the summer of 1976, “Night Catches Us” follows a Black Panther prodigal son named Marcus (Mackie) on his return to his working-class neighborhood in Philadelphia where his former fellow Panthers are less than eager to welcome him home. The only person he connects with is his best friend’s widow, Patricia (Washington)–cue the steamy love scenes.

Find out why we have a girl crush on Kerry Washington

Get a behind-the-scenes look at Kerry Washington’s ESSENCE photo shoot.