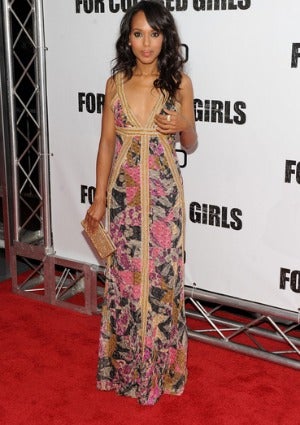 Kerry Washington is one determined woman. After finding out that Tyler Perry was working on an adaptation of “For Colored Girls,” the actress cornered him during an event. “I said, ‘I heard you’re doing “For Colored Girls” and I’d love to be involved,” she says. “When the time came he wanted that too, so that was good,” she adds. Washington plays Kelly, a case worker whose life intercepts all the other women’s lives. Washington spoke to ESSENCE.com about playing Kelly, working with such a monumental cast and why she doesn’t like seeing herself on the screen.   ESSENCE.com: Were you very familiar with the play, “For Colored Girls Who Have Considered Suicide When the Rainbow is Enuf”? KERRY WASHINGTON: I was but I’d never been in a production of it. I knew it was a very important piece of literature that I was familiar with and had seen different productions of it. ESSENCE.com: How did you get on to this particular project? WASHINGTON: I expressed an interest to Tyler when I saw him over a year ago. I said, “I heard you’re doing “For Colored Girls” and I’d love to be involved.” When the time came he wanted that too, so that was good. ESSENCE.com: You play Kelly, a social worker dealing with her own issues around childbirth. How did you get into the character? WASHINGTON: It’s interesting because I think a big part of what Kelly does is she’s there to witness a lot of the other women on their journeys, and so I was very inspired by my fellow actresses. That was what my role in the film was, to kind of take in their experience and process that and that’s who Kelly was as a social worker. ESSENCE.com: You worked with Phylicia Rashad, Loretta Devine, Thandie Newton, Kimberly Elise, the list goes on. How would you describe that experience in hindsight? WASHINGTON: Life-changing. It was breathtaking. I mean on the last night we shot the rooftop scene together and when we finished we all ran over to video village, which is where all the chairs with everyone’s names on them, and we just kept taking pictures of the chairs because to look out there and see chairs that say, Tyler Perry, Phylicia Rashad, Macy Gray, Anika Noni Rose, Janet Jackson, Whoopi Goldberg, I mean to see this group filled with talent… It was very special for us all to have the opportunity to work together. ESSENCE.com: What would you like Black women to walk away from this movie with? WASHINGTON: I think everyone, not just Black women, can learn from this because of the range of experiences that is explored in all these different characters. There’s an entry point into the material for everyone, no matter where you are in your life. The stories themselves are so diverse and so true that everybody has a place where they can identify themselves into the film. ESSENCE.com: By now you’ve seen yourself at your most vulnerable, and at your happiest on the big screen. Does it still do anything for you to see yourself? WASHINGTON: I can’t stand it. ESSENCE.com: Well we can. WASHINGTON: [laughs] Good, ’cause it’s very difficult for me to watch myself. “For Colored Girls” is currently in theaters. What did you think of Kerry’s role in “For Colored Girls”?