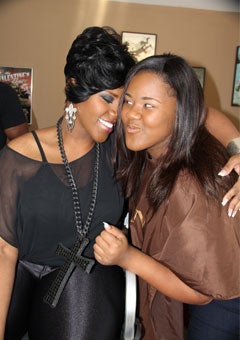 We’re getting closer to the May 3rd release date for “Kelly,” and I’m a ball of emotions right now. I’m nervous, excited, anxious and so many other things, but mostly excited. Its been a few years since my last R&B project and so much has changed about the way music is made and marketed to the public, but I’ve stuck to what has always worked for me as an artist — and you have responded with nothing but love for ya girl!

Thank you!!! The second single, “Not My Daddy” f/Stokley and Mint Condition, is really doing its thing on radio right now. We just finished editing the video and you will see it on the air really soon. I have to give a big shout out to my homies Stoke and Wadell (co-producer and Mint Conditioner member) for taking my song and producing it to perfection! It sounds just the way I heard it in my head when I wrote it! By the way, be sure to pick up their new CD “7” — in stores now!

Then, of course, there’s the incredible Regina King who directed the video for “Not My Daddy.” For those of you who don’t know, she is so much more than an actress. As much as I love what she does in front of the camera, I think I may love her even more behind the camera and in the director’s chair. I first took notice of her skills on the Jaheim video for “Finding My Way Back,” which she also directed. I knew I wanted to work with her at that moment, and when I called her to talk about directing the video, she said yes without hesitation! Im so glad she did.

I totally trusted what Regina envisioned for the song, so when we sat down to discuss the treatment I told her, “Whatever you see when you listen to the song is what we will do,” and she took it from there. Regina decided to cast my daughter as a young Kelly along with another talented teen named Cameron, who played young Stokley. (He’s a cutie… I told him he might need security after this video comes out). The storyline plays out in color vignettes from the past with most of the present day shots of me and Stokley in black and white. Regina’s idea was to use the contrast to show the more lively and vivacious times of the relationship in color, and the black and white was to help indicate that over time the relationship faded. Pure genius!

I could go on and on about my experience with this song and working with Regina and Stokley, but I want to leave some room to post photos from the video shoot.

Last but not least, PRE-ORDERS are now available for “Kelly,” so don’t wait. Order yours now and have it in your hands right from your mailbox on release date! I can’t wait for you to hear this CD!

Share this blog with someone you know… (all smiles)

Until the next one,