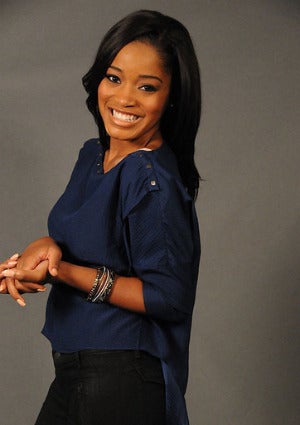 These days it’s not enough to be great at acting or singing — there are very few single-talent celebs. To be competitive in Hollywood, two or more talents are required. It’s a fact. Back in the day, Brandy was more than a vocalist, and nowadays Keke Palmer, 17, is making it known that she is more than an actress. ESSENCE.com caught up with the bright and bubbly Palmer to chat about Nickelodeon’s “Worldwide Day of Play,” her budding new music career, and how she stays grounded in the midst of stardom. ESSENCE.com: Saturday is Nickelodeon’s “Worldwide Day of Play,” and the network is shutting down for three hours to get away from their TVs. What do you and your family do to stay active? KEKE PALMER: We do a lot of stuff together. We were planning a trip to Indiana Beach. I used to go there with my family back before my little brothers and sisters were born. We used to go swimming and fishing and all that type of stuff. So, we do things as a unit, as a family to stay active. You know, going to the Rose Bowl, going to my little brother and sister’s football games and cheerleading games. ESSENCE.com: What’s the name of your new album and have you set a date? PALMER: No, no date yet. The single will probably drop next month. I’m in the studio with Rodney Jerkins right now, who is the executive producer of the album and we’re getting ready to pick that single. We’ll be giving it to y’all next month and the album will probably come out next year. I think the album will just be called “Keke Palmer.” ESSENCE.com: “True Jackson VP” is a hit, what’s next for you acting-wise? Are you planning to branch out into more movies? PALMER: Definitely, after “True Jackson VP.” We’ll find out if we’re doing a third season in January. The show had me tied up so much that I haven’t been able to do much of anything else. But before the show I did a lot of films, so I’m familiar with it. But I’m ready to go back. I’ve had a nice little break with the steady TV show but I’m definitely ready to do some more films again. I was just asked to join a new Marvel comic project called, “Runaways.” ESSENCE.com: You’re growing up in the public eye, how are you able to stay so grounded and out of trouble, unlike your celebrity peers? PALMER: I must admit it’s my parents and the way that they raised me. They definitely make sure I don’t even have a chance to get ahead of myself or do the wrong thing. They’ve instilled a lot great values. And I’m so family-oriented that I always want to make them proud. I would never want to do anything that would disappoint them at the end of the day. ESSENCE.com: Is college on your horizon? PALMER: Yes, I would love to go to Howard. I want to get a break because it’s hard doing school and working at the same time. So I’m thinking within the next year or so, I’ll go to a junior college then I’ll go to my four year school, hopefully Howard.