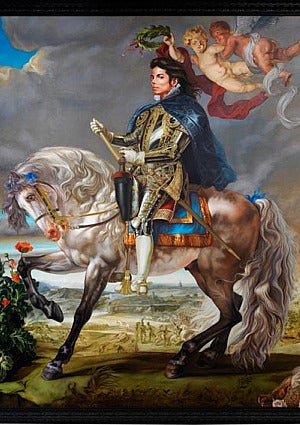 Last year, Jackson commissioned artist Kehinde Wiley–known for his images of Black men in street clothes striking Renaissance style poses and set in complex backgrounds–to paint his portrait. While MJ didn’t get a chance to see the finished piece, Wiley’s painting showed at Art Basel Miami Beach at the booth for NYC gallery Deitch and sold for $175,000. The elaborateness of MJ being crowned by cherubs while sitting on a horse with it’s front hooves in this slightly dark image is classic Kehinde Wiley just taken up a notch for the king of pop.