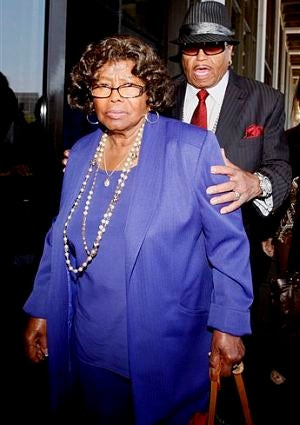 Katherine Jackson will release a new coffee table book to coincide with the one-year anniversary of Michael Jackson’s death. The tome, “Never Can Say Goodbye,” goes on sale tomorrow and features personal photos from Mrs. Jackson’s collection as well as her thoughts of her superstar son. The book is only available at jacksonsecretvault.com. Mrs. Jackson recently told the Daily Mirror that Michael’s children were well adjusted but had no friends, reports TMZ. “They don’t have any friends. They don’t go to school, they have private lessons at home — but that will change in September, when they are due to enroll at private college,” she said. Michael’s daughter Paris has also built a shrine to her father, says her grandmother. “Paris went into a closet and she brought out seven or eight pictures of Michael, and she told me, ‘No, I want daddy hanging in my room’. So she goes to bed looking at him and wakes up looking at him. She said, ‘I always want to be able to see him.'” “Never Can Say Goodbye” goes on sale tomorrow, Monday June 21st.
Loading the player...