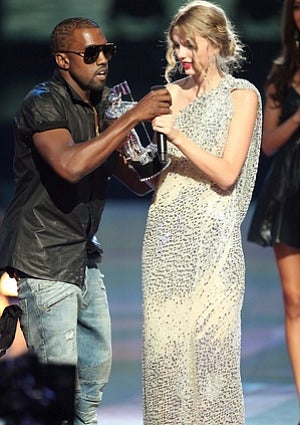 It’s been a hard year for Kanye West, after stealing the microphone away from Country music’s new darling Taylor Swift at the 2009 MTV Video Music Awards. After a period in exile — in which he interned for Fendi in Rome — he recently resurfaced in a major way, but it seems like he just can’t let go of the Swift incident, repeatedly apologizing to Swift, whether on the radio or his new Twitter account. “I’m sorry Taylor,” Kanye tweeted, “She’s justa lil girl with dreams like the rest of us.” So, tonight is the main attraction: the 2010 VMAs. Rumors have been swirling for months of a duet. Yesterday, MTV producers officially shot that down, explaining that West and Swift are not planning to do anything to mark the anniversary of their stand-off, say the producers of the event… But the blogosphere is saying that Swift will be singing a song off her new album blasting Kanye. Meanwhile, Kanye — who had a 3am secret performance at the reopening of the posh Boom Boom Room in NYC during Fashion Week — is trying to make good with the girl, going so far as to write a song for her: “I wrote a song for Taylor Swift that’s so beautiful and I want her to have it.” We’ll have to see what happens tonight. One thing’s for sure, though — we’re going to be happy to never hear about any of this again.