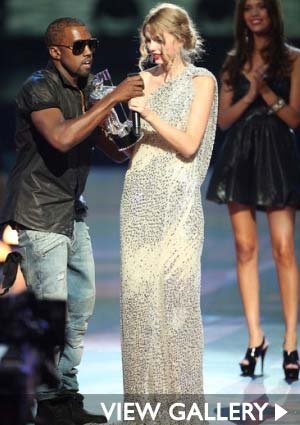 We wonder how Kanye feels about hijacking Taylor Swift’s “Best Female Video” acceptance speech at the VMAs now that they stand side-by-side as the Top Male and Top Female Artists of the Year on Billboard’s year-end charts. Ironically Swift beat out Beyonce–whose video West thought was more deserving of the VMA award–for the number one spot. West is the Top Male Artist of 2009 and ranks at number six over all on the Billboard charts. Swift comes in at number one. Also in the top twenty are the Black Eyed Peas at number four, T.I. in the eighth spot, Flo Rida at thirteen and Ne-yo and Lil’ Wayne at seventeen and eighteen.