A sea of African American women dressed to impress filled an elegant ballroom for The Black Women’s Agenda, Inc., luncheon—one of the hottest tickets during the annual Congressional Black Caucus Foundation conference.

The organization, which is celebrating four decades of empowering and enriching the lives of Black women and their families, hosted its Annual Symposium Workshop and Awards Luncheon on Friday at the Marriott Marquis hotel in the nation’s capital. The luncheon, while not an official CBCF event, is always a draw for Black women leadership during the annual conference.

More than 1,200 elected officials, including several members of the Congressional Black Caucus to Washington, D.C. Mayor Muriel Bowser, joined corporate and community leaders, the media and members of the group’s national collaborating organizations.

“For 40 years, The Black Women’s Agenda, Inc. has protected, secured, and advanced, the issues and rights of African-American women and their families,” said BWA President Gwainevere Catchings Hess. “Today we pay tribute to our founders. In these anxious and uncertain times, we also reaffirm our commitment to speaking truth to power and securing for Black women all of the opportunities and privileges America promises its citizens.”

During its Awards Luncheon, BWA continued the tradition of recognizing high achieving African American women. This year’s award recipients encompassed a who’s who of ‘sista’ power, ranging from an iconic poet to the only Black woman currently serving in the U.S. Senate.

Senator Kamala Harris (D-CA) accepted the President’s Award, the highest honor bestowed by BWA for exemplifying its ideals and goals. In brief remarks, the former Attorney General of California touted the collective accomplishments of African American women, from voting in record numbers during the 2008 and 2012 elections to being among the most educated groups in the U.S. holding college degrees. 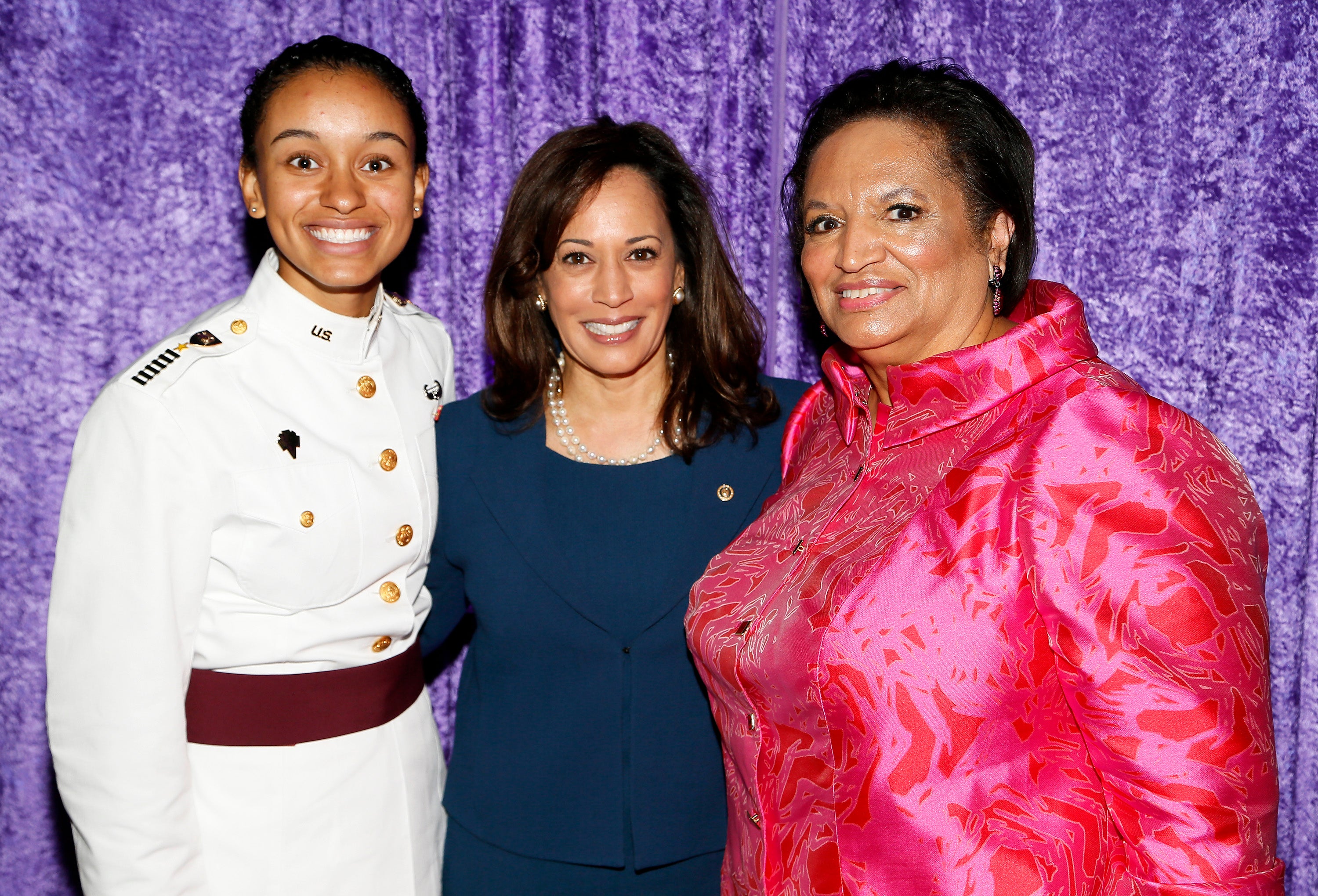 Yet the Senator, who recently co-introduced a bipartisan bill which encourages states to reform or replace the practice of money bail and has challenged various policies of 45th President Donald Trump, added that there is still work to be done.

“We know the agenda is still very much something we have to fight for. I also would say, the Black women’s agenda is America’s agenda. Let’s be clear about that.”

She referred to issues such as quality health care and opening doors of equal opportunity for women. Harris quoted her mother’s wisdom: “And she would look at me and say, `Kamala, you may be the first to do many things, but make sure you are not the last.’”

Dr. Hazel N. Dukes, President of the NAACP New York State Conference; Briana Richardson, an activist and freshman political science major at Spelman College; and Dr. Patricia A. Maryland, President and Chief Executive Officer of Ascension Health Care. In addition to receiving an award, Maryland presented BWA with $50,000 dollars to be used for its work and mission.

BWA also hosted an Inform & Inspire workshop for middle-school age girls enrolled in a Washington, DC chapter of Girls, Inc. The program featured Kara McCullough, a physical scientist at the Nuclear Regulatory Commission and the reigning Miss USA 2017. She reminded the girls that pursuing a career in science, technology, engineering, or mathematics (STEM), setting goals and working hard to realize them “can be a beautiful thing.”

Guests such as Angela Hollis, Vice President of Advanced Meetings Solutions, Inc., in Philadelphia, came to the luncheon with colleagues. “I’ve come before and always enjoyed myself,” she said.

Rhonda Crowder, an engineer, described herself as an “excited first time” attendee.

“This was my first rodeo but it most certainly won’t be my last. I came to celebrate the esteemed honorees and to unite with my phenomenal sisters in carrying forth the charge of “protecting, securing, and advancing” the rights of African American women and their families,” she said. “This is another watershed moment in our nation’s history and I don’t plan to be a spectator. … It is our agenda. It is America’s agenda. I will lend my voice to the chorus of change agents to lead us forward.”

Indeed, BWA’s president noted some of the issues facing America right now, be it immigration or challenges to voting rights. But Black women have the power to speak up and out to create change.

“That’s not who we are as a nation, and it can’t be what we allow America to become. Today, I ask you to reject the politics of fear, hatred, and division and focus instead on the word `in.’  Invite, inform, inspire, initiate, instruct, invest, innovate, include,” said Hess.

“We must take an active role in reclaiming this nation’s conscience, and we must begin this work today.”