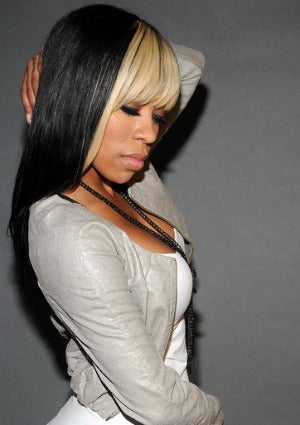 It’s not too often that you come across an artist who gives you goosebumps. To get that type of reaction, there must be a combination of powerful lyrics and a soul-grabbing voice. With that said, allow us to formally introduce you to K. Michelle. She’s one of the few artists who claim she can sing — and can back it up, pound for pound. Not only that, she has an interesting background. This FAMU graduate and former Miss FAMU winner has two singles bouncing around the Internet and a YouTube video, “Where They Do That At,” catching thousands of clicks. It’s only a matter of time before this Memphis native is a household name. With her lead single “Just Can’t Do This” debuting on 106 & Park last week and a new album entitled “Pain Medicine” due out this fall, fans are eager to hear more from K. Michelle. ESSENCE.com: Why did you decide to call your new album “Pain Medicine?” K. MICHELLE: I just felt like music is supposed to be the bridge between heaven and earth. It has the ability to heal. So when I thought about the different songs I wanted on the album, and where I was in my life I said why not call this “Pain Medicine” because it’s therapy relief for me. I’m sure when people and women hear this album, it’s going to help them as well. ESSENCE.com: Any collaborations to watch out for? K. MICHELLE: R. Kelly is the executive producer of the album. I have a duet with him on the album, as well as songs with Rick Ross and Miss Elliot. But I’m really excited about the records that feature me. ESSENCE.com: Who are your musical influences? K. MICHELLE: I love three people greatly. I love R. Kelly, Whitney Houston and Mary J. Blige. And my favorite rapper is Kanye West. ESSENCE.com: How has being a single mother influenced your work? And are there any songs that touch on that? K. MICHELLE: Being a single mother has affected me greatly, because it makes me fight harder. A song is my way of taking care of my child and paying bills. I took a lot of time out of my child’s life to do this. I also missed my child’s first solo at church. I didn’t get to see that because I was out on the road working. A lot of things that are important to him, I’m not always there for them. I have a lot of songs about everyday life. I have a record called “Just Ain’t My Day,” it’s about all the things that just aren’t right. Some things will go wrong for me. I’ll wake up one morning and be very upset my child isn’t around. So I do have songs that touch on being a single mother. ESSENCE.com: Tell us about your lead single “I Just Can’t Do This” and the inspiration behind that song. K. MICHELLE: It’s a very strong record for me. It’s about loving someone to the point where you can’t take it anymore. Men go through that. Women go through that. That was something really important for me. I was going through a phase and I was working with R. Kelly and he takes from whatever you tell him. He’ll take from that experience. That was a situation I just got out of. I’m speaking on a topic that’s not foreign to any of us. ESSENCE.com: How do you plan to distinguish yourself from your peers? K. MICHELLE: I think people are different. God makes everyone different. A lot of times in this business people want to familiarize an artist. People will say “who is this girl?  She’s kinda like Mary.” I’m going to distinguish myself and just be me musically. I play the piano and sing differently. I grew up listening to country music. I love country music! I love how they tell stories. I write my own music, too. I’m going to lean more toward my big ballads. It’s difficult to get on stage and sing a ballad without any fluff. I know how Whitney made me feel. Even with my urban edge and my street mixtapes I plan on making this a great musical journey for everyone.