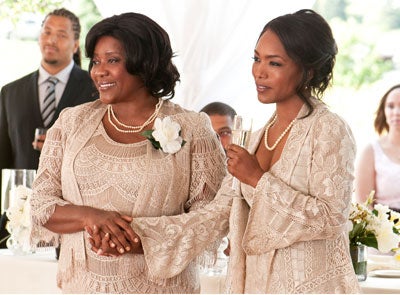 Black love on the big screen has been hard to come by in the past decade. Our classic love films like “Boomerang” and “Love and Basketball” cannot be duplicated, and it seems Hollywood has no desire to try.

On Sabrina (Paula Patton) and Jason’s (Laz Alonso) road to the altar, there are unexpected potholes causing the soon-to-be bride and groom to question whether or not they should marry. The Taylors and Watsons are from different sides of the tracks; and when they convene for the wedding at Martha’s Vineyard, meeting for the first time, the matriarchs of both families clash. Pam (Loretta Devine) disapproves of Sabrina and her mother, Claudine (Angela Bassett), for their bourgeois behavior and class status. Meanwhile, Claudine is also turned off of by Pam’s “rude” and “simple” behavior.

As the couple’s family drama unfolds, secrets are revealed, lust is in the air and love is tested. The maid of honor, Blythe (Meagan Good), opens herself to love by dropping her ridiculous laundry list of standards. Shonda (Tasha Smith), the best friend of Pam, is contemplating taking on the cougar role with a man half her age, Sebastian (Romeo Miller). Claudine is faced with the task of marrying her daughter while her own marriage is in shambles, but for a different reason than she suspects. And Pam, a widow, is faced with letting her son be a man and live his own life.

But through all the tests and trials, love prevails.

Black love is alive and well. Despite the unhappy single Black woman meme broadcast on news segments or conveyed in articles, Black love exists and thrives without tragedy. Rarely does a film like “Jumping the Broom” that celebrates the institution of marriage and the Black family unit get the green light for major distribution.

Instead of diverse portrayals of Black women in love, tropes have become the norm for mainstream Black films. The uber-successful, emasculating married Black woman; the evil Black woman that makes six-figures, but can’t find a man; the uneducated poor Black woman who is saved by a man or Jesus, or both; the Black woman who loses her man to a white woman; or the downtrodden Black woman who never finds a man, are most commonly depicted without so much as anyone batting an eye. With how Black women are marginalized in film, one would believe love, for us, is nonexistent.

Although the movie was not without its flaws, it felt good to see the type of love I have experienced with an awesome Black man. And the love I’ve witnessed at friends’ weddings.

Black women being open to love, falling in love, and maintaining that love happens daily. Watching “Jumping the Broom” in the theater reinforced the power in love, the hope in the possibilities of love, and the beauty of love between a Black man and woman.