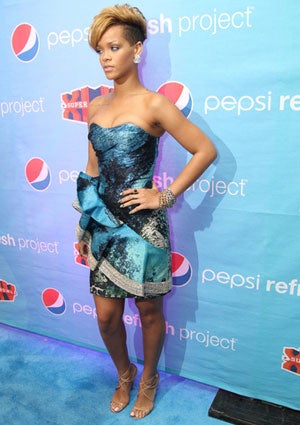 It’s been a year since that tragic night between young lovers Rihanna and Chris Brown. Here, we present a letter to our dear friend looking at how the time has passed. Dear Rihanna,  Wow, girl, has it really been one full year since the unfortunate incident??? Happy to see you’re holding up fairly well, considering everything that has transpired since the whole big domestic abuse fiasco. One year ago today the 2009 Grammys were being held and you and Chris were nowhere to be found, you left all of us wondering what really happened, were the rumors of him hitting you really true, and more importantly, why would such a thing occur. Everything was confirmed when we saw that disturbing photo of your bruised face and bloodied lip. Girl! That was just too much. We were shocked because we all had witnessed the pre-punch success you and Chris had, combined with the aww-too-cute love for each other. Then the whirlwind of events started to occur as a result and I’m sure you weren’t prepared for any of that. From Oprah to Kanye and everyone else taking sides day in and day out for almost nine months. Having every magazine, website, television and radio show dissecting and reporting whatever little piece of info they could gather. Talk about stress, add that to the fact you were still processing the love you had for Chris.   We have to be honest, Ri-Ri, we were all appalled and ready to awwwf when we saw you gallivanting with C. Breezy at Star Island on Miami Beach. But really what could we say? Most of us had been there before. And although your situation was quite extreme, we forgave you, because we understand how hard it can be to immediately cut ties to the heart. You laid somewhat low, on the scene very seldom as you worked through your issues, as real woman should. What surprised us was that amid all the drama, you stayed focused enough to drop Rated R, an album filled with some pretty successful singles. On November 23, you took the opportunity to reveal even more that happened that night as well as let us know in very artistic way how you have been dealing with it all, resulting in more than a half a million records being sold to date.   Although things are much harder for Chris, as they should be, we did appreciate you baring some of the more intimate details of that chilling night with Diane Sawyer on 20/20. You answered those hard questions head on, but we weren’t totally convinced after seeing Chris Brown’s rebuttal interview with Robin Robert that you were telling us the whole truth. Hey, at the end of the day, you control what you let out but we don’t want what you let out to be a fib. Even though it’s all said and done and isn’t really none of our business–we still really want to know, do you still keep in contact with Chris? Just how many times has Chris went off on you? And will you ever admit what EXACTLY was said or done to provoke him to act like he lost his marbles?   Again if we are being honest, many of us are over the whole situation. We feel like it has been sensationalized enough. However, domestic abuse isn’t something you get over, and really, Ri-Ri, while we are happy you are out with you new boo, baseball player Matt Kemp, you and Chris, whether you like it or not, have become the poster children for domestic violence. It’s great to see you on all the talk shows, at the Grammys, and doing pre-Super Bowl performances, but we would really rather see you doing more for the domestic violence cause. You said yourself that their are young girls whom your decisions affect, so why not do more to make them more aware and equipped?   Show us not only evidence that you have gotten past the drama, but that you are helping others avoid going through it. We just want you to realize your power and the lives you could help. Otherwise, this one year mark doesn’t mean that much.   P.S. Watch that Matt guy…you know what they say, fool me once, shame on you, fool me twice, shame on me. 😉 Sincerely, Shirea