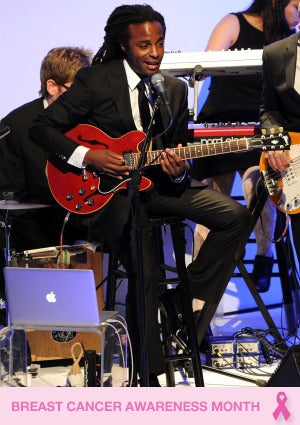 Grammy-nominated singer/songwriter John Forte is a man who isn’t afraid to wear pink. In his efforts to support and fight for a cure for breast cancer, the crooner has thrown on his pink ribbon, and released a special edition EP titled, “The Bloomingdale’s Acoustic EP” for Breast Cancer Awareness Month. All proceeds from the purchase of the single “There We Are” will go to the Breast Cancer Research Fund. Forte spoke with ESSENCE.com about the album, how breast cancer has affected him personally, and how fighting for a cause takes more than just a month. ESSENCE.COM: With Breast Cancer Awareness month coming to an end, what does it actually mean to be aware? FORTE: When you’re aware of something, it becomes more than just a month, it becomes more than just day or a holiday. Yes, it’s great to have a month you can put on the calender, or show solidarity by wearing a pink ribbon, but I’m not going to just do this every October, I’m going to fighting for this every moment I can. That’s awareness in the truest sense. ESSENCE.COM: How has breast cancer personally affected you? FORTE: I had a cousin who recently passed away from breast cancer. She was only four years my senior. She was gone within six months of being diagnosed. I always think of her. ESSENCE.COM: Why create a EP album specifically tied to Breast Cancer Awareness? FORTE: Ever since I’ve been performing I’ve been asked to do acoustic renditions of my songs, and promised it to people, but never had the opportunity to do so. Knowing that I was going to have an important platform like Breast Cancer Awareness month, it afforded me the time and opportunity. The songs are intimate and personal, not over-produced, it’s just the guitar and vocals. [The songs] are an honest exchange, and could easily be me showing up in someone’s living room or office. That’s what it deserves, not something that’s glossed over. ESSENCE.COM: Proceeds for “There We Are,” are being donated to charity. Why dedicate this track specifically to the cause? FORTE: “There We Are” is all about looking up and ahead, while envisioning your success. Envision all of us getting to the other side of this disease, knowing that one day we will find a cure. A day when people won’t be ill inflicted or suffer from [the disease]. We’ll get there. Right now, and with a song like “There We Are,” it’s about projecting that positivity and energy until we can meet at the finish line.