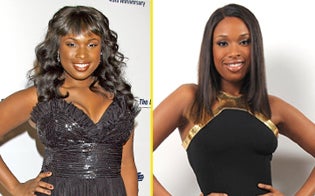 Even before Jennifer Hudson won an Oscar and grabbed the attention of the world, the girl from Chicago was determined to change one thing she wasn’t satisfied with: her weight. Taking her very befitting mantra of “If you don’t like something, change it” and putting it to use, the now 28-year-old new mom did just that. Back when she was a size 22, she woke up each morning to workout. “I’d do the workout tape, I’d run up the steps for about 20 or 30 minutes, go outside, jog around the block, go to the gym–all in one day,” she said recently. Through sheer determination J-Hud worked her way to a size 10 prior to auditioning for “American Idol” in 2003. After getting booted from “American Idol,” J-Hud used that same determination she had to lose weight, to find her next act. It would be playing the part of Effie White in “Dreamgirls,” for which she had to gain 20 pounds by eating “all the cookies, cakes and pies” she could. But, as soon as filming stopped, Hudson was back to working out and eating healthy–she even reportedly skipped drinking alcohol on the night of her Oscar win so she could be fresh for her morning workout. From there, her weight would be an issue for the media to speculate. Would her size lessen her chances of getting roles? Did she fit the standard of Hollywood beauty? J-Hud wasn’t bothered. “[Weight] is definitely a part of the industry,” she told Robin Roberts on GMA, “but it keeps you separated, and helps you stand out from other people. They need some normal-sized people around here, so that doesn’t bother me at all.” Fast-forward and Jennifer Hudson is a new mom with 35 extra pounds of baby weight, and she just didn’t feel right: “I was like, ‘Who? … Oh, my God, this is me,'” she said after seeing pictures of herself post-baby. So, she signed up with Weight Watchers to help her reach her goal of becoming “a better me.” J-Hud refuses to say how much weight she’s lost or how much she plans to lose because her goal is to be healthier, not skinnier. But after giving birth to David Otunga, Jr., she says what she wants most is a healthy lifestyle that sets an example for her son. “This is a good way of how I would want my child to grow up, because so many times in growing up, you gain really bad [eating] habits… so I want to make sure that he’s going into this and I’m being a good example for him.” Now that’s keeping your eye on the prize. Find out how J-Hud made the journey from a size 22 to Weight Watchers spokesperson. Read More: