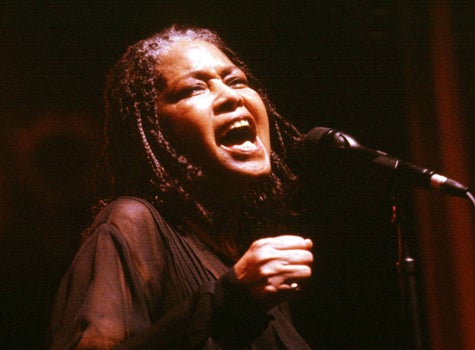 Gifted jazz singer, Abbey Lincoln, died on Saturday in New York City, reports the New York Times. Lincoln’s death was announced by her brother David Wooldrige. The Michigan native is known for her singing, but also remembered for her bold outspoken stance on civil rights. Her songs were often laced with emotional revelations to deep philosophical reflections. She looked to a lot of the great Jazz artists for inspiration, such as, Billie Holiday and Duke Ellington. The outspoken activist was always quick to say her husband, iconic legendary Jazz drummer Max Roach, was her “biggest influence.” The pair married in 1962. Her first album, “Affair…a Story of a Girl in Love,” was made in 1956. Lincoln continued to make stellar hits thereafter, such as, “That’s Him” and “Abbey Sings Abbey.” Along, with an impressive music resume, the multi-talented woman appeared in films, including, “Nothing but a Man,” in 1964, and “For the Love of Ivy,” co-starring Sidney Poitier, in 1968. Along the way, she inspired other artists: “I learned a lot about taking a different path from Abbey,” singer Cassandra Wilson told the New York Times, “Investing your lyrics with what your life is about in the moment.” Rest in peace Miss Abbey Lincoln. Listen to her rendition of, “Sophisticated Lady.”