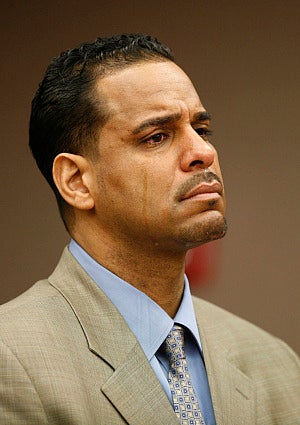 A judge sentenced ex-New Jersey Nets baller Jayson Williams to five years in prison for shooting and killing his limo driver, Costas “Gus” Christofi, in 2002. A tearful Williams, apologized to Christofi’s family saying, “There’s not a day I wake up and I don’t feel sorry for what I did to Mr. Christofi,” CNN reported. Williams entered a guilty plea to aggravated assault in the fatal shooting of Christofi. His plea deal required that he spend from 18 months to five years in jail, without chance of parole. The Somerset County Superior Court Judge Edward Coleman sentenced Williams to the maximum possible time served. Williams has waived his right to appeal, CNN pointed out. Following his sentencing, police will take Williams to the Central Reception and Assignment Facility in Trenton, New Jersey, where he will be photographed, have DNA samples taken and be given medical, dental, psychological and educational evaluations. Afterwards, authorities will decide where he will the former NBA player will be placed. Read More: