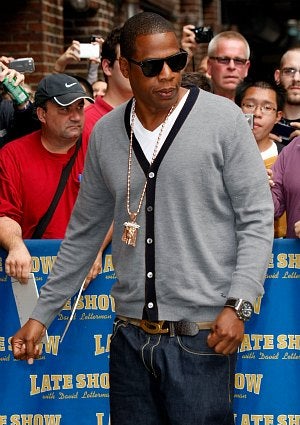 Funny what growing up, getting married and being a success will do. Now that rapper Jay-Z has made it from hustler to business mogul to hubby, the mad he once felt toward womenfolk has left him. Now that he’s working on his new book “Decoded,” which is about him explaining some of his past lyrics, he realizes that there are a few songs there that he’d rather not revisit. Namely, “Big Pimpin’…” From Yahoo! Music:

“Some [lyrics] become really profound when you see them in writing. Not ‘Big Pimpin.’ That’s the exception,” he told the Wall Street Journal in a candid new interview. “It was like, I can’t believe I said that. And kept saying it. What kind of animal would say this sort of thing? Reading it is really harsh.” The lyrics to “Big Pimpin’ ” describe Jay-Z’s troubled relationship with women (in short: He wants them to look good, stay away from his money, and be available when he needs them), a subject he has abandoned since marrying Beyonce in 2008. In fact, Jay says all hip-hop needs now is love.

“We have to find our way back to true emotion. This is going to sound so sappy, but love is the only thing that stands the test of time,” he told the WSJ, name-checking two of the most iconic hip-hop records of the past 15 years. “‘The Miseducation of Lauryn Hill’ was all about love. Andre 3000, ‘The Love Below.’ Even N.W.A, at its core — that was about love for a neighborhood.”

We’ve all seen this before. Eddie Murphy, once one of the most profane comics around, admitted that he could no longer listen to his earlier work like “Raw,” due to things like “growing up” and “having kids.” Ice Cube, once one of the original “gangsta” rappers as part of NWA, stars in kiddie movies and makes TV shows. Snoop Dogg, weed and porn lover, coaches a Pop Warner football team. Ice-T, while still kind of pimpish looking, actually plays a cop on TV. And he once produced a rock anthem called “Cop Killer.” All your favorite rappers and lovers of the professional machismo, if they live to see a decent, peaceful age, do pretty much the same thing — grow up. Both lyrically, artistically and emotionally. Even Luther Campbell, a man who loved to rap about sex and only sex, came out in support of Elena Kagan for the Supreme Court… in his newspaper column. What sounded great as a kid (“Bitches ain’t shit!”) doesn’t sound quite right when you’re married, have a daughter or two and the mad has left the building. Then there’s that whole realization, if you go into business, that women buy music, movies and tickets too, and you know, maybe there’s more money to be made in NOT antagonizing them. That will change your mind too. Jay settled down, got serious and got married. Although I’m not a big Jay-Z fan, even I could tell the tone of his music had changed over the years. A lot of the misogyny that shows up in some rap music comes from the fact that you’ve got a bunch of dudes trying to one-up and impress each other. If that means you have to do a few verbal drive-bys on some women, who cares? Ha, ha. It’s supposed to be funny. If you’re not a “bitch” you shouldn’t care. Ha, ha, ha, some more. Then you grow up and you have that epiphany (if you’re lucky) and you realize that you don’t need to take a dump on all women to make yourself feel better. And you don’t like it when other people say mean things about the women you love. Being married to a gorgeous woman who loves to perform sans pants, Jay-Z probably gets an earful of disgusting on the regular. I bet that was an eye-opener, seeing the sexism that Beyonce has to deal with on the regular. Then there’s the fact that there’s always someone who takes your lady disses as heart — not art — no matter how you quantify it. And you don’t want to see your music used as justification to treat people horribly. Plus, if you’re a good enough lyricist, most people will still buy the records and won’t even notice you’ve eased up on the lady bashing. No one actually downloads a single because “OMG! He really let those uppity women have it!” They buy it for the beat and if the lyrics happen to be awesome, that’s just all icing. Jay, essentially, is too big for this mess now. And much like his stance on how dude’s shouldn’t wear a Jersey as a shirt outside of a Knicks game, this is a good thing. How many young people will listen? I don’t know. How many kids read “The Wall Street Journal” where he made these statements? I’m guessing not many. But blogs that the kids read will read the WSJ article and might report on it. It might trickle down to them. Will the kids care? Nah. They’re likely to emulate whoever the kids like now. But rappers do grow up (if they manage to not get killed in their prime). Which is why even though I’m not a huge T.I. fan (I do like a few songs and his flow), I was actually kind of bummed about him going back to prison. Because, T.I., for what it’s worth, is going through the epiphany right now and has been for a few years. Slowly changing his music and his mentality. Marrying his long-time girlfriend. Doing good work in his neighborhood. Unfortunately, that epiphany did not tell him to DO HIS DRUGS AT HOME, not in a moving car. But maturity, by definition, takes time. Growing up is the best thing most rappers do. Danielle Belton writes about race and politics on her blog, The Black Snob.