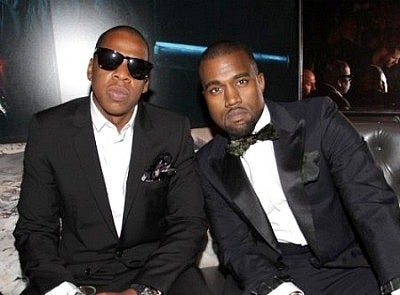 It’s been a long time coming but Jay-Z and Kanye West are officially recording a collaborative album, “Watch the Thorne.” The Rockefeller royals recently set up a studio at the Tribeca Grand Hotel where they’ve been hard at work, laying down tracks from night until early morning, the New York Post reports…

The artists reportedly began working one Wednesday night and kept recording until 7.a.m. on Thursday. “They were laying down tons of tracks,” a witness said. “It was intense — no Beyonce and no booze.”

Yeezy’s also put his fashion hand to work with the release of his own scarf line inspired by album artwork from “My Beautiful Dark Twisted Fantasy.”  The catwalk cloths were made in collaboration with French Designer M/M Paris and are priced at $365 each. Check out the limited edition scarves here.