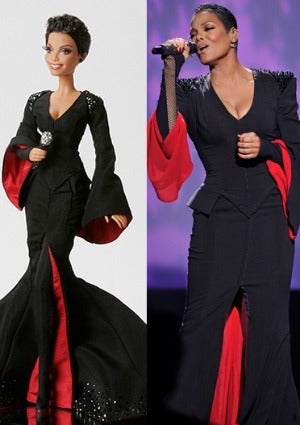 When Janet Jackson stepped on the “American Idol” stage in May, wearing a dazzling black gown with red details to sing her single “Again,” we all exclaimed, “Yes! Ms. Jackson is back!” It seems the folks at Mattel were paying attention too, creating a collector’s edition “Divinely Janet” doll that captures the performance. Mattel designer Jackeline Gonzalez doesn’t miss a detail, showing off Jackson’s freshly chopped locks and perky cheekbones. “Look closely dolls, Janet’s sassy, short hairstyle, unique face and body sculpt and face painting all meticulously duplicate the legendary singer’s features.” Gonzalez took it a step further by duplicating the sexy catsuit that Jackson revealed during the second half of her performance. The doll is currently up for auction to benefit Project Angel Food. How much would you pay to take Janet Jackson home with you?