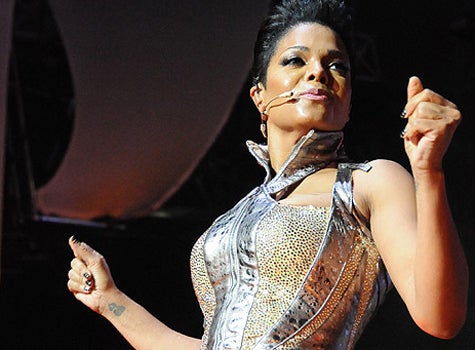 After voting for 35 new tour locations, Janet Jackson’s fans can’t wait to see her on stage. In just 10 minutes, tickets to the pop diva’s “Number Ones, Up Close and Personal Tour” sold out in Los Angeles and she’s already adding new shows.

Back by popular demand, the sizzling pop star will headline a tour in 35 cities including Atlanta, Chicago, Los Angeles, and Las Vegas.  To keep up with her ticket sales, she’s already  scheduled a new performance on April 15 at the Gibson Amphitheater in Los Angeles and as always, the “Velvet Rope” star promises to deliver.

“These concerts will be different from anything I have ever done. I will be as up close and personal as possible,” Jackson said in a statement. “These concerts are not about special effects. This is a love affair between me and those of you who have supported me and my work for all these years. I’ll be singing and dancing from my heart. The music will all be songs that you’ve made number ones for me. Let’s go!”