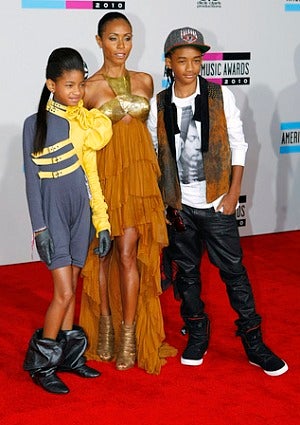 Most of us grew up in an authoritarian household — what mom said was the Bible, and as long as we lived under her roof we would abide by her rules. Jada Pinkett-Smith says she and her husband Will Smith “don’t have rules” for their superstar kids, Jaden and Willow. Instead they “come up with agreements… Kids are little people and we’re in life to guide them. Trying to rule someone is always an illusion and it’s no different with children.” Jada described a recent altercation she and Willow had after the 10-year-old set up a social networking page despite her parents’ advice. “I told her not to, so I was so mad. I said, ‘What do you think I should do now?’ So Willow said, ‘Mom, take my computer away.’ And I said, ‘How long for?’ She said a month,” she explained. “So it’s negotiations. I’m not saying it’s always perfect. I have my bloops and my blunders, but I’m doing my best.” Do you agree with Jada? Would you rather negotiate with your kids than make rules?