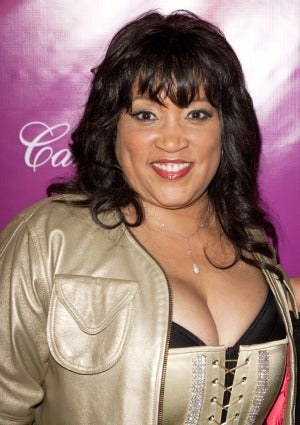 For five years Jackee Harry teased and taunted us as the sexy vamp Sandra Clark on the hit comedy “227.” Today she’s crisscrossing the country in J.D. Lawrence’s latest play, “Me & Mrs. Jones” co-starring Darrin Dewitt Henson and Eva Marcille. Harry always believed that if “you put it in, you’ll get it out,” and these days she’s working fiercely to stay at the top of her game. In addition to “Me & Mrs. Jones,” she’s going to star in BET’s upcoming original series “Let’s Stay Together.” The sassy, bubbly and inspiring actress spoke to ESSENCE.com about everything from what kind of man she’s on the hunt for, what TV show she’s dying to do, and whether Sandra was a role model. ESSENCE.com: Let’s start off by talking about “Me & Mrs. Jones.” Tell us about your character? JACKEE HARRY: Her name is Jasmine Jones and [she’s] with Scooter, a 25-year-old rapper played by [playwright] JD Lawrence. He’s my baby daddy and he owes me child support. So I’m trying to get my life back together and raise my daughter, and he ain’t actin’ right! ESSENCE.com: What’s it been like for you to be a part of this show? HARRY: It’s different. This is a real play. It’s not just funny; you do remember the storyline. It has a beginning, middle and an end. It’s dramedy. It’s really a drama with comedy and music. It’s not “hit you over your head.” It’s a real story and people love it. It’s got different twists and turns, but you have to really pay attention. You can’t come in at anytime. It’s like “Rent” meets “Fame.” ESSENCE.com: The National Congress of Black Women recently honored you with their “Woman of Substance” award for your work as the Global Ambassador for The Women’s International Center. HARRY: The title is not big enough for me because I believe in empowerment of women. I really am a feminist, though I never used to call myself that. My goal is to give young girls confidence in this world so they can be more like men in the decision-making process. I want them to be more in control of their lives. Women often come up not knowing how to make decisions. We get wishy-washy. We become great wage earners — breadwinners — but we don’t know how to control empires. And I’m talking about the empire of your community. The empire of your church, or wherever you are the center of. ESSENCE.com: This year “227” is celebrating its 25th anniversary. Do you think a show like it could make it today? HARRY: Yes, but it would have to be tweaked and changed. Sitcoms are making a comeback, but you’ve got to have a little quirkiness in there now. ESSENCE.com: What do you think the legacy of “227” will be? HARRY: That Marla Gibbs was the star of it. She’s strong. People took it for granted, but she implemented a lot of change on there. She did not hold her tongue. She fought for all of us. She and I are great friends. She and I have come full circle. She’s the best person. ESSENCE.com: How do you feel about the portrayal of African Americans on TV today? HARRY: Where are we? That’s my answer. We’re just not visible, and it’s a shame. I keep my fingers and toes and everything crossed and pray everyday that something is going to come. We are a multi-cultural society. We’ve got to have another “Cosby” kind of moment to really get it going. “For Colored Girls” is coming out this week, and I hope that will get something going. ESSENCE.com: Speaking of “For Colored Girls,” you did the play before. Why weren’t you in the movie? HARRY: I know! I’m about to call Tyler and say, “Tyyyyler.” ESSENCE.com: The NAACP Image Awards has honored you twice… HARRY: No. It was three times!  ESSENCE.com: Oh! We’ve been read! Okay, three times! However, they didn’t honor you when you were playing Sandra because they didn’t feel like she was a good role model. Do you think she was? HARRY: Hell no! No! She was scandalous! But they don’t deal with that now, as you see because Monique got one for “Precious.” She was not no role model in that picture! There’s no way that was an image. Do you know what I’m saying? But I ain’t mad at them. ESSENCE.com: You’re a cougar? HARRY: I gotta get me a shirt — cougar alert! ESSENCE.com: What do you look for in a man? HARRY: Just some fun. A good sense of humor. Good shoes — very good shoes and suit. Someone who doesn’t lean on me. Sexy. Self-assured. And don’t be afraid of me. ESSENCE.com: You are longing to be on “Dancing with the Stars.” HARRY: I know! I’m trying. I lost out to Brandy this year. ESSENCE.com: Do you think you’d have a shot at winning? HARRY: Absolutely! If they don’t carry me out on a stretcher. I’ll be fabulous. ESSENCE.com: After everything you’ve done, what are you the most proud of? HARRY: My relationship with my son has gotten better. I wasn’t so good at it before. I’m much better now. I’m not a great domestic person. I’m not a great wife or mother, but I’ve become much better, and he’s gotten more tolerant of me.
Loading the player...