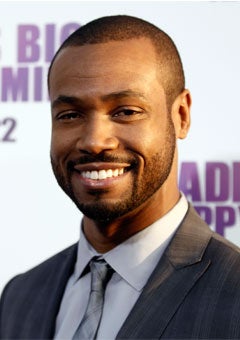 From Old Spice commercials on the small screen to “Madea’s Big Happy Family” on the silver screen — there’s no stopping Isaiah Mustafa. After creating perhaps one of the most memorable commercials in recent TV history, Mustafa is on his way to bigger and better things.

ESSENCE.com caught up with him to talk about landing his first movie role with Tyler Perry, what he thinks this film says about Black love and Black families and more…

ESSENCE.com: You’ve had a fantastic year. You leaped from commercials to movies. What has it been like?
ISAIAH MUSTAFA: It’s been a blessing — such great opportunities that came along. It’s been so much. I haven’t had a chance to stop.

ESSENCE.com: Tell us how you got the part in “Madea’s Big Happy Family?”
MUSTAFA: What happened was I read for “Colored Girls” and I guess I did pretty good. You never know how you really do until someone tells you, but I guess I did fairly good, but I never heard anything about it. But I did get an invitation to be on the “Oprah Winfrey” show. So I was on the show and she was asking me about the commercial and how everything was and I was telling her. Then she said, “What are you doing out there in Hollywood?” And I said, ‘I’ve been talking to people and been auditioning for stuff and I just read for a Tyler Perry movie, ‘For Colored Girls.’ ‘ She went on and said “You know I know him?” Then I was trying to be funny and said, ‘If you know him why don’t you put in a good word for me?’ Then Oprah goes, “Why don’t you do it yourself? Because he’s sitting right next to me!! (In his Oprah voice he came out and said I got the job and that’s how I got cast in “For Colored Girls.”) But then he said I wouldn’t be right for that movie because it would be more of a cameo. He said, “I’m not going to put you in ‘For Colored Girls’ but I’m going to put you in ‘Madea’s Big Happy Family’ it’s much bigger role and I think you’ll enjoy it a lot more.”

ESSENCE.com: Your character, Calvin, is so lovable. What was it like to play such a positive lover in a heavily damaged and secretive marriage?
MUSTAFA: Calvin is the one throughline in the film, besides Madea. But he is the voice of reason for his family but no one is really listening to him, at least his wife isn’t. The other family members know how good he is but his wife doesn’t pay attention. For me it was so much fun to do something besides Old Spice so I can show people there’s another side to me. It’s a blessing that he gave me this opportunity.

ESSENCE.com: What do you think this movie says about Black love and Black families?
MUSTAFA: That it’s unrelenting — that it doesn’t stop because there’s problems in the marriage and that you have to hold it together. I think that’s what’s cool about Calvin. Even in the end when he realizes what’s going on he still stays in it. And about families — I have a huge family. I have five sisters and one brother, about 35 nieces and nephews — but we all stick together too. Sometimes families fight and when you grow up with someone and you know good and bad things about them but you get into it every once in a while. But on top of everything you’re family but it should never come to a point where you’re not talking to someone. It seems like every family has their days but most Black families can pull it together usually through the matriach of the family.

ESSENCE.com: In preparation for this role did you take any acting classes?
MUSTAFA: I worked with Chip Fields, Kim Fields’ mom, and she was so cool. She walked me through the process and helped me understand the character and what message Calvin was trying to give to movie goers. She really wanted me to get that across. She said Calvin was the rock and at all times you have to be the rock for your family and for Kimberly. So no matter what happens the rock doesn’t shy away from problems or give up on the goal — which is to have a happy family.