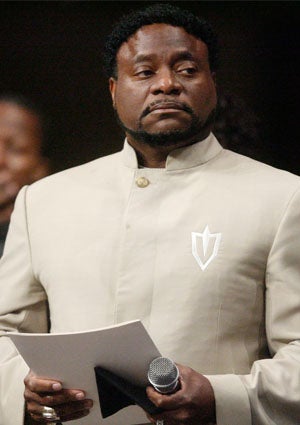 At 7 AM, the parking lot was already filling up for the first service of the day, which would start promptly at 8 AM at New Birth Missionary Baptist, home of embattled pastor Bishop Eddie Long. Inside, the atmosphere was cheerful. People bustled around talking about the usual Sunday things; what they would do after church, where they might have lunch. No one seemed to be talking about the elephant in the room: what Bishop Long might say about the lawsuits alleging that he coerced young men in his congregation to have sex with him. The church sits on 250 acres of land in Lithonia, Georgia, with a sanctuary that can seat 10,000. There were around 8,000 in church, according to one of the elders on stage. The inside is set up auditorium-style, with two levels of seating around a circular stage. Flags of many nations adorn the walls. I asked a woman seated next to me what she thought Bishop Long was going to say. “I know he didn’t do it,” she said emphatically. “People are evil. We were fasting 21 days and I felt something like this would happen. The attack is not just against him, but the whole church.” She was not the only one who felt that way. The atmosphere inside the church was electric. People were jumping, shouting, singing. When Bishop Long finally appeared, about one hour into the 90-minute service, holding the had of his wife, Elder Vanessa Long, he got a thunderous standing ovation. The couple stood at the podium together for a minute, where Long gave her a kiss. Then he walked her to her seat. Wearing a well-tailored beige suit with a stand-up collar, Long read his message from an iPad. He started by thanking everyone for his support. “I’m humbled by such a loving congregation.” A man behind me shouted out, “We support you, Bishop!”   “I realize that many people have been waiting for me to say something,” Long continued. My first responsibility is to my family. My next responsibility is not to address the world before I address my family, New Birth.” Then Long preached on handling painful and difficult situations, using Psalm 34:19 as his text. He spoke of the reality of painful situations, the response and the remedy. After spending about 15 minutes on his sermon, punctuated by affirmations from the congregation, he used five more minutes to address the accusations. “There have been allegations and attacks made on me. I have never in my life portrayed myself as a perfect man. But I am not the man that’s being portrayed on the television. That’s not me. That is not me.”   “By the counsel of my lawyers, they have advised me not to try this case in the media. I am not gon’ try this case in the media. It will be tried in the court of justice and dealt with in the court of justice and please understand because that’s the only place I think I’ll get justice, but being in the hands of God.”   “Please hear this. Please hear this: I’ve been accused. I’m under attack. I want you to know, as I said earlier, I am not a perfect man. But this thing I’m gon’ fight.”   “And I want you to know one other thing. I feel like David against Goliath, but I’ve got five rocks and I haven’t thrown one yet.”   With that, he swiftly left the stage with his wife to still more rapturous applause. Bishop Long gave the impression of a man who has been wronged and is preparing for battle, confident that the Lord is on his side.  Several people left right after he spoke. At first I thought they were disappointed with his message. Then I realized that it was time for altar call, and people were trying to beat the traffic home. Afterwards, I tried to solicit reactions from some of the churchgoers. No one wanted to go on record, even though off the record, they were generally supportive. An elderly woman on her way out of the church said that she supported him all the way. “People are just out to get him,” she insisted. A man wearing a New Birth staff shirt declined to comment. “I don’t want to be talking just to talk,” he said. “I don’t really have an opinion yet.” Another woman also said she did not want to talk on record, but then proceeded to talk for about five minutes. “There’s a lot of politics in this area,” she began. “Why is this all coming out just now? God is in control. Nothing happens without his permission. Satan needs God’s permission to do anything. This place has been a family to me. If something bad happens in a family, you don’t turn your back on them. I don’t know if the allegations are true but even if they are, you don’t turn your back when a family member starts hurting. We’ve all done things we are embarrassed about.” Teniqua Jackson (not her real name) used to attend New Birth, but left because she found it was too big to give her a sense of community. She watched the service via web feed. “My take is he didn’t say anything,” she told me later. “He didn’t confirm or deny. What he did was create a stage to imply that he didn’t do it and for the congregation to infer that he didn’t do it. If he in fact did it, that’s the worse thing he could have done. Black people won’t forgive him for letting them believe something that was not true.”