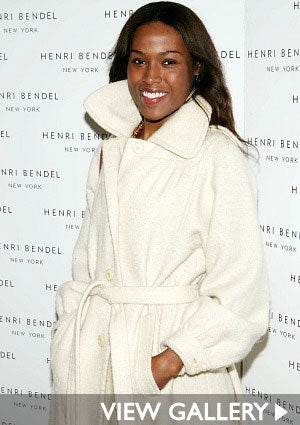 Besides the red-hot artists she represents, former model turned gallerina, Nicola Vassell is one of the most exciting figures in the art world. Known for her impeccable taste both as a director at Deitch Projects–an art gallery on the forefront of the art universe–and her carefully curated wardrobe choices, the Jamaican native has long been a poster girl for downtown New York style. Now luxury brand Cole Haan has tapped her as one of its faces for the “Inspired Life” ad campaign which features the coolest kids in New York. After years spent working for the likes of Oscar de la Renta, Ralph Lauren and Donna Karan, Vassell hung up her modeling gloves for the glamorous grind of the art world. She pursued a degree in business and art history at New York University–a transition she didn’t find at all surprising. “It was just an extension of my interest in all forms of cultural expressions, fashion being one, art being another,” she says. The roster of artists whose careers she manages includes art world darling, painter Kehinde Wiley and up-and-coming artist Tauba Auerbach. While she may have left modeling behind, Vassell’s jet-setting lifestyle continues. Her position requires she do a fair amount of traveling. “It might be to an art fair to meet a client, to go on studio visits or meet with book publishers. There’s no such thing as a typical week for me,” she says on her way to a Sunday meeting with a client. Like one of her favorite designers, Yves Saint Laurent, who famously declared that “fashion fades, style is eternal,” Vassell is a student of fashion that lasts through the seasons. You’d much rather find her at a local boutique shopping for up-and-coming designers than a trendy big box department store. “I tend to find inspiration in young unknown designers who have a particularly deft kind of ability to make clothing that looks like art work,” she says. She counts fellow Jamaican, Grace Jones‘ madcap style among her favorite inspirations. “She always dared to be different and she was always a moving piece of art. She was never afraid to make very radical statements through her image and her clothing. I respect that.” Vassell totally indulges in the adventurous side of fashion. She loves the experimental style of Japanese designer Yohji Yamamoto and the edgy minimalism of Helmut Lang. “The stranger, the more unique, the better for me,” she says. She also adores her thrift store finds. “I often find my favorite pieces in vintage bins too so I’d say my fashion is a kind of mish-mash of things.” Though she presides over one of our most coveted fashion closets, she sees it otherwise. “I like to play dress up, certainly, but I’m not consciously thinking of myself as some sort of style maven, necessarily.” Her love of fashion and art has merged and evolved into a beautiful career for Vassell. And she’s loving every minute of the journey. “It’s endlessly fascinating for me,” she says, “I’m just grateful to have this kind of exchange and dialogue with very interesting and exciting people.”   Check out a few of the looks that make Nicola Vassell one of our favorite tastemakers. Read More: