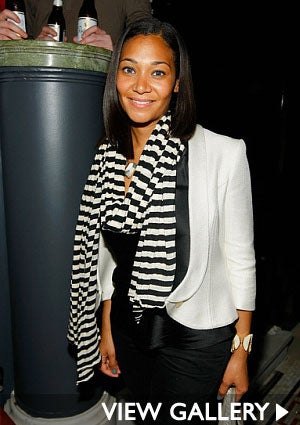 Monique Pan may have kicked off her career as an investment banker at Goldman Sachs, but a love for the arts and design led her to her current flourishing career as a fine jewelry designer. After spending three years in finance, Pan began to take design courses on her time off. It didn’t take long for Pan to realize that fashion was her true calling and she subsequently left her gig to launch a successful namesake line of jewelry in 2006. In addition to making her mark in the fashion world, Pan, who strives to be socially responsible, made a decision to keep her line eco-friendly in addition to being innovative and ber-stylish. A word traveler since she was a little girl, Pan’s Haitian father worked for the UN, the D.C. native was drawn by the art and cultures of the many countries she’s visited like Haiti, Egypt, Bali, Malawi and Russia. Her American Jewish mother was also instrumental in encouraging Pan’s interest in the arts. “I aim to create wearable pieces of art that enhance the individual and raise awareness of Native art and culture,” says Pan. The first designs she created were inspired by Mali’s Tuareg tribe. The results were woolly mammoth and walrus ivory pieces sourced by Alaska natives. Pan’s Bering Collection uses the remains of fossilized walrus, caribou, conflict-free diamonds and recycled gold. Ten percent of the proceeds benefit the Alaskan Native Arts foundation. Pan’s mix of vintage, modern materials and semi-precious and precious stones has the fashion world at attention. Just last year she was awarded with two prestigious awards. Pan was a winner of the Eco Domani Fashion Foundation and a runner-up at the CDFDA Vogue Fashion Fund where she was awarded $50,000 by fashion’s most influential players to continue to build and grow her independent business. At the CFDA ceremony the ecstatic designer vowed that “she will not disappoint.” While her fine jewelry isn’t easy on the wallet, it does help to know that every piece Pan sells promotes ethical trade and raises awareness of indigenous people and environmental issues. Pan collaborated with Charity: Water, a non-profit that works to provide clean water to third-world countries, to design a line of jewelry inspired by water. 50% of the proceeds from the sales of her pieces provide clean drinking water and sanitation for 10 people for up to 20 years.   As she’s steadily climbing up the fashion ladder, her tireless efforts to clean up the planet are only getting bigger and bolder. In an industry where doing good often takes a back seat to looking good, Pan is a one-of-kind independent spirit that adds new meaning to fashionably giving back. And she’s looking great doing it. Check out some our favorite Monique Pan looks. Read more: