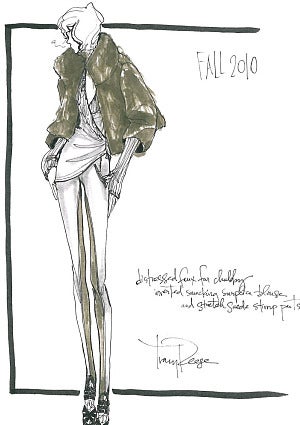 As you know, February is Black History Month–but in New York City, it’s also Fashion Week month. God knows we’ve made sufficient noise about the lack of Black models on the runway, so instead, I’d like to celebrate Black designers. Stephen Burrows, Tracy Reese and B. Michael have defined our times and weathered the storm that is the fashion industry (these days, everyone is a critic, aren’t they?). Check out my conversations with each of these three fashion visionaries, as well as some exclusive sketches they shared with me!

STEPHEN BURROWS (StephenBurrows.com) When I arrived in New York in 1975, there were few African American designers and certainly none who had achieved any kind of stature–with, of course, the exception being Stephen Burrows! IMAN: What was the inspiration behind your Fall 2010 collection? STEPHEN BURROWS: My biggest inspirations were the colors of artist Gustave Klimt, Tiffany Lamps and the interbellum period between World Wars I and II, when the artistic community was most needed, embraced and celebrated. IMAN: What is the biggest obstacle you have come across in the past five years, and how have you dealt with it? BURROWS: Retailer recognition has been a struggle for me. Just getting them to come see my product has been very frustrating, but you have to keep pursuing until you get them, or run out of financing and have to close the doors. IMAN: What do you think the future of fashion is during these hard economic times? BURROWS: Fashion has no future. Fashion is dying because retailers are ruining the business by being lazy and not searching out new resources. They concentrate only on the big, trend-following companies and leave the small fashion companies out.  Hence, everything looks alike and the customer is bored and reticent to buy new clothes. Sometime in the near future, we’ll likely see the death of the ‘department store’ as we know it.  It’ll be killed off by lazy and computerized buying habits of that sector. The profit-margin driven syndrome is dealing a death blow to what once was a thriving and exciting industry in America.

TRACY REESE (TracyReese.com) Tracy Reese ranks as one of the fashion industry’s most successful African-American women whose realm is not only relegated to the runway. In a business where few designer labels seem to make it past their fifth anniversary, Reese has two clothing lines, Tracy Reese and Plenty. IMAN What was the inspiration behind your Fall 2010 collection? TRACY REESE: For Fall 2010, I was inspired by life. I focused on clothes that I want to wear and colors that I found most enticing. This translated to a lot of rich, natural tones–including an array of greens, from spruce to sage and jade–as well as rich browns, smoky blues and sweet blush tones. I designed pieces that are very modern, but still wearable–an eclectic mix of rural and urban. Rustic Prince of Wales plaid, distressed our and stretch suede styles are sweetened by cometic toned lingerie and made cozy by soft alpaca sweaters. IMAN: What is the biggest obstacle you have come across in the past five years, and how have you dealt with it? REESE: As my business has grown, so have my responsibilities. Juggling these responsibilities and still having time for a personal life has been my greatest challenge. IMAN: What do you think the future of fashion is during these hard economic times? REESE: Women will always need and desire fashion, it is one of the many ways we express ourselves. It will be increasingly important to provide beautiful clothes at very accessible prices. Real clothes for real people with real lives.

B. MICHAEL (BMichaelAmerica.com) This fantastic designer launched his first couture collection in 1999 and, similar to his approach to millinery, his design exudes a glamourous, clean aesthetic. He heightens his couture vision by infusing emotions such as joy, adding a discernable feeling and festive mood to his creations. IMAN: What was the inspiration behind your Fall 2010 collection? B. MICHAEL: I am building a collection of sharp but feminine suits and dresses for day time. Important clothes that will work in the board room or for lunch. Cocktail dresses that are very politely sexy and gowns that are modern glam. Overall, it’s about blending what is classic with what is modern. For me it’s about global culture… which is how we now live and what we are now exposed to. Mixing the cultural elements. This is a couture collection, and in June, I’ll present it in New York to an invited audience just before the Fall/Winter couture shows in Paris. IMAN: What is the biggest obstacle you have come across in the past five years, and how have you dealt with it? B. MICHAEL: I would say the biggest challenge is choosing the right managers and business partners who understand the delicate balance of business, branding and the nuances of the fashion industry. With the help of new partners and a strategic PR campaign, the objective is to make B. Michael America a lifestyle brand. IMAN: What do you think the future of fashion is during these hard economic times? B. MICHAEL: I think that fashion will play a role in the recovery of our economy. It is important that products give both value and a definite point of view. There has to be a reason to buy another dress…. Resonating both value and romance. Read More: