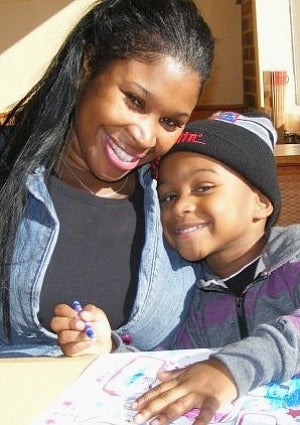 You know those love songs with lyrics like, “I love you so much I can’t breathe”? Well, I used to think the notion of losing it over a man was ridiculous… until it happened to me. In June 2006, my son’s father left us for dead. Sound dramatic? So was his departure. One Friday afternoon, he called and said he’d be home shortly and we were going to the movies. I went through my usual routine. I whipped my hair, glossed up my lips and found a cute ensemble to look great with — and for — my man. Then I prepped our son, who was two years old at the time, straightened up and we waited for daddy to come on home. We never stopped waiting… At first, I thought he was late. Then, one hour turned into three. I called his cell. No answer. I called his mom. She hadn’t heard from him. By midnight, I started thinking the worst. I began calling hospitals, his job and police precincts. Nothing. My mind ran wild. Was he a John Doe in some morgue? Was he locked up and taken to another city? I was petrified and constantly on edge. I couldn’t eat. I rarely slept and I was a nervous wreck. My life looked like this for six months. For 180 days I worried that my son would never hear his dad’s voice, remember how his cologne smelled or have him to teach him how to tie a tie. On New Year’s Eve that year, I prayed to God for relief. I needed to know. I needed closure. He answered. A few days after the New Year, a woman called my house and told me she was with my ex. She’d heard my name mentioned by relatives, but my ex had silenced her every query. Her story blew me away. They’d been living together — oh yeah, and they had a six-month-old baby. Now’s the time to insert the plane crash, building crumbling or whatever metaphor you can think of for falling apart because that’s what happened, but not before I got a chance to see him. I convinced the woman that we should convene and confront him at his new job. As soon as she and I were face-to-face, I knew why he picked her. I’d arrived in a cab. She pulled up in a spanking new white Infiniti; get the picture? He’d left his blue-collar blues behind. We ran into Ms. Infiniti’s man’s supervisor who paged him to let him know he had two female guests. I knew he’d be on the lookout and so was I. I saw him looking from a corner and before he could retreat, I was on him. Hysteria. Relief. Heartache. Disappointment. Anger. I can go on and on, still no words can sum up how I felt. And I let him know. I pulled a Jerry Springer on his behind, called him every name under the sun and let everyone in earshot know what he’d done to me. His son. Our home. Yes, at his job. And, yes, he got fired. That night, I handed his new girl two garbage bags filled with his things, but the truth was I kept his baggage for a long time. I couldn’t let go. That’s when my depression began. I realized then that I would have to raise my son on my own. The thing I never wanted was coming to pass. My life began to disintegrate. I’d have spells of lightheadedness; I was losing weight and my blood pressure dropped to 80. I even had heart palpitations. But I knew something was wrong in 2008. I was rushed to the hospital because I was having chest pains while I was driving. After scores of tests, I found out my arteries weren’t clogged; I was dying of a broken heart. I’d had an anxiety attack because I was internalizing all of the pain and nervousness the came along with being abandoned with a child. The doctors prescribed countless pills to ease my ague, but I didn’t want to be a zombie. After a lot of prayers and intercessions from a few loving friends, who I call angels, I finally made it to a therapist… but it took two years. Today, I am strong enough to say I lost it… for a while. I let my love for a man and my anxiety over raising a Black boy alone consume me. As Black women, we are taught that we are supposed to be fearless and always overcome. It’s not fair and not true. Being a single parent is scary. My son only knows me and calls on me for everything. I am the nurturer. I am the provider. I am the enforcer. It’s overwhelming. It’s my life. I will always walk with the lessons I’ve learned. I know that I have to guard my heart with a strong spirit of discernment. In addition, I know now that when it comes to men, it’s “packaged as is.” I won’t be delusional about red flags or who a person plans to be. Lastly, I will love myself enough to protect my health, happiness and sanity. Recently, I began having dreams about me as a little girl. Back then, I was tough, fearless and brave. She is still with me, but I’ve come to terms with my strengths and weaknesses. Yes, heartbreak made me vulnerable, but God has given me the fortitude to move on and to love me enough to stop holding on to what a man did to me. Most importantly, my faith in God reminds me that only He is responsible for keeping me — and he never fails.