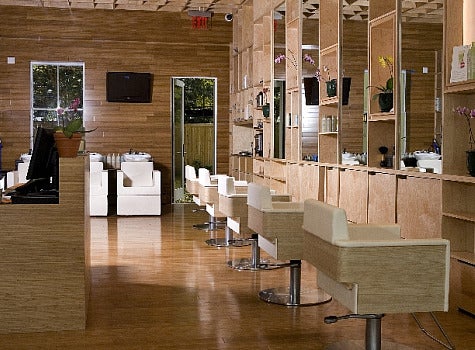 Hair salon owner Andi Marie Jones put it all on the line when she left her career as an events planner to follow her passion for hair and beauty by enrolling at the Aveda Institute. By the time she fulfilled her dream of opening a salon, the recession hit. Her credit dried up and fewer customers came. But she didn’t relent and kept pushing forward despite the difficult times. Here she shares how the tough times have taught her to be a better business woman and brought her closer to God. I used to be an event planner in Dallas until I had a really bad car accident that changed my life. I suddenly wanted to do more with my life and started thinking in terms of the long run. I visited New York three days after September 11th and it seemed like the things I was interested in didn’t have as much hold over me anymore. I knew that hair and beauty was always my calling so I left everything behind, moved to New York and started attending the Aveda Institute. After I finished at Aveda I worked from home full time and began writing a business plan because I’d always dreamt of to opening a spa. A business plan essentially means your budget for the first year or two. You have to figure out how much everything is going to cost, from the electric bill to the water. So writing a business plan became my full-time job for about a year and a half and by the time I was finished it was like 12 pages long. Things happened very rapidly after that. I found a location and opened the salon, but the same week, Lehman Brothers and AIG went under. So it was like I’m over here screaming, ‘Grand opening!’ when everybody’s suddenly unemployed. About a month later, American Express cut off all my business credit. It wasn’t because I had done anything wrong; it was just companies started cutting the credit of small businesses. Everything I thought I had planned for didn’t work out. I had money arranged for financing and 40% of that was cut as well. So now I had no credit and I had no cash, all within two months of opening. It’s been rough at times. Going to the hair salon is one of the first things people cut out when they’re trying to save money. I’ve been to a place where I’ve paid the business phone minutes before it was disconnected. I’ll say that I’ve made about $50,000 worth of mistakes and/or miscalculations my first year of business and that’s something I’m not ashamed off because I want other people wanting to pursue this dream to be ready, to have a contingency plan. I had to reevaluate my business. Luckily my fiance works on Wall Street and one of the things that he does is financial analysis and he has taught me how to run my business. I was one of those salon owners who kept saying I need more this, I need more staff, I need more products, and he was like businesses that succeed are those that learn to control and minimize costs. So I reevaluated my business about six months after opening and I was able to save $4000 per month in expenses. But I had to reduce my inventory and fire three people. That was hard because I’ve never had to fire anyone. It really hurt. I am a true believer, and I remind myself constantly that God didn’t bring me this far for no reason. It’s been a really incredible journey and there were times I didn’t think I was going to make it. One of the things that keeps me going is knowing that I am accountable to a lot of people: myself, my staff, my neighborhood, my landlords who even renegotiated my rent for a temporary amount of time so that I would not go out of business. I was not going to make it, but when I say that God has gotten me through this, I really mean it. Andi Marie Jones is the owner of Sanctuary Salon in Brooklyn, New York.