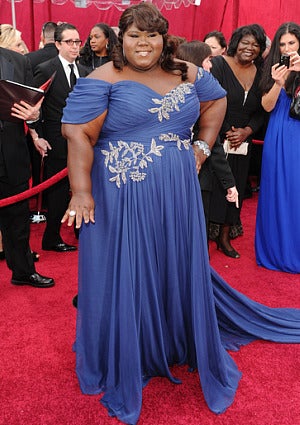 What’s a sure fire way to know you’ve made it? People start talking smack about you. ‘Precious‘ lead actress Gabourey Sidibe was treated to a slew of insults by Howard Stern and his satellite radio show co-host Robin Quivers. The longtime radio personality called Gabby, whose name he stumbled over, “the most enormous, fat black chick I’ve ever seen.” He went on to say that Sidibe shouldn’t expect to be receiving any scripts in her mailbox any time soon because she’s too big to play any roles in Hollywood. “She’s never going to have another shot,” Stern said. “Everybody’s pretending she’s a part of show business,” Quivers said “…what part do they have that she can play?” “Blind Side 2, she could be the football player,” Stern replied. Stern and Quivers may have to eat their words. Gabby’s set to make appearances on the new Showtime series “The C Word” and she’s already lined up a big screen roll alongside Zoe Kravitz in the movie “Yelling to the Sky.” Read More: