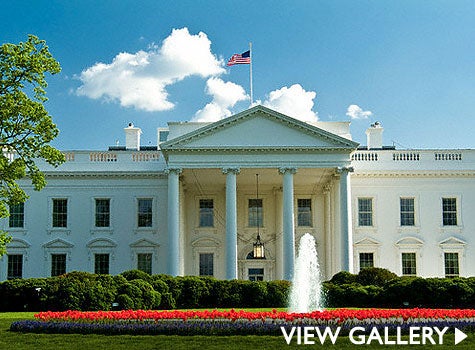 As we all know, with a new President comes a change to the political landscape of Washington, D.C. But people who live in Washington understand that the residents of 1600 Pennsylvania Avenue can also have a big effect on the city’s social scene.

That’s been the case for President Barack Obama and First Lady Michelle Obama, who have made a splash since their move nine months ago. In contrast to the Bushes, who rarely ventured into the city, the Obamas have made frequent outings beyond the White House. Last month they celebrated their anniversary at West End’s Blue Duck Tavern, and they’ve been spotted dining at numerous other mainstays including Equinox, Georgia Brown’s and Five Guys Burgers and Fries. They’ve seen the Alvin Ailey American Dance Theater at the Kennedy Center, visited an exhibit at the Newseum with daughters Sasha and Malia, and the President even popped up courtside at D.C.’s Verizon Center, cheering on the Chicago Bulls when they played the Washington Wizards.

“D.C. has been through a lot of development and revitalization in the past few years,” says Carla Barry-Austin, a spokeswoman for Destination DC, Washington’s official marketing organization, referring to chic new businesses that have replaced vacant lots and neglected buildings in many neighborhoods. “The Obamas’ arrival has cast a new spotlight on the city, and now people all over the world are catching up to what Washingtonians already know. It’s the new capital of cool.”

The dynamic changes in Washington may have not started with the First Couple, but many residents say they have contributed to a hipper vibe.

“The Bushes never went out, but now people have been encouraged to get out more socially, to see and be seen,” says Johnica Reed, a media entrepreneur and former nonprofit executive, adding that she’s spotted other White House officials, such as Senior Adviser Valerie Jarrett and Social Secretary Desiree Rogers, at restaurants and galas around town. “I know a lot of people in very nice cities, like New York and Chicago, who now want to move to D.C.”

Besides making their mark outside the White House, the Obamas have also kept their promise to invite more people inside–and not just for State Dinners with the political establishment. Along with entertaining musicians, artists and actors at the White House–including Denzel Washington, Oprah Winfrey, Spike Lee and Serena Williams–they’ve also opened their doors to everyday citizens for events including a poetry slam, jazz workshops, and garden vegetable harvesting.

“The President and First Lady really want this place to be the people’s house,” White House Assistant Social Secretary Samantha Tubman told ESSENCE.com. “When we’re planning any event, we’re thinking about how inclusive we’re being in terms of the people who are coming.”

It’s a sentiment that the Obamas have repeated over the course of the year. “You’ve got one part of Washington, which is a company town, all about government, and is generally pretty prosperous,” The President said in a January ABC News interview. “And then you’ve got another half of D.C. that is going through enormous challenges. I want to see if we can bring those two Washington, D.C.’s together.”