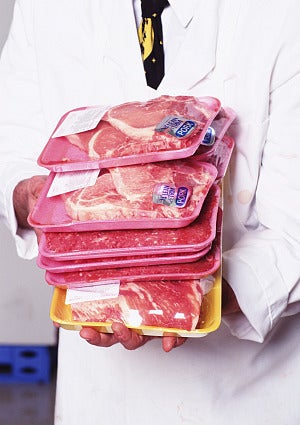 Imagine the horror of going to a restaurant where the chef’s special reads something like, “Chicken contaminated with salmonella” or “E.Coli-infected Beef”? You’d never go back again, right? Not so fast. Each time we buy supermarket chicken and beef or go to a restaurant, that is exactly the kind of risk we are taking.

A recent study by Consumer Reports magazine found that two out of three store-bought whole broiler chickens are contaminated with salmonella and campylobacter–two types of bacteria associated with food-borne illness. Researchers for the magazine bought 382 raw chickens from 100 stores in 22 states and found that nearly two-thirds had the two types of bacteria. While store-bought organic chickens were found to have no salmonella at all, brand-name chickens like Purdue were found to be the cleanest and Tyson and Foster Farms were the most contaminated. The magazine called the chicken industry “a very dirty industry that needs better practices and tighter government oversight.”

Recently alarms have also been going off about the safety of beef, culminating with the USDA recalling some 248,000 pounds of “needle-tenderized” steaks intended for chain restaurants on Christmas Eve. In the past week alone the Centers for Disease Control reports that in states like states Washington, Michigan and Kansas, nearly 21 people have gotten sick from the E.coli strain 0157.H7, which can lead to food poisoning and acute kidney failure. E.coli gets into our food supply through the fecal matter of animals, Dr. Michael Greger, author of “Bird Flu: A Virus of Our Own Hatching” told the Huffington Post recently.

Dr. Greger quoted a University of Minnesota study of 1,000 food samples in which 69% of pork and beef and 92% of poultry samples had “evidence of fecal contamination.” E.coli is also said to have negative effects on women’s health, he added:

“Scientists now suspect that by eating chicken, women infect their lower intestinal tract with these meat-borne bacteria, which can then creep up into their bladder. Hygiene measures to prevent UTIs have traditionally included wiping from front to back after bowel movements and urinating after intercourse to flush out any invaders, but now women can add poultry avoidance as a way to help prevent urinary tract infections.

The Center for Disease Control estimates that contaminated meat and chicken infects some 3.4 million Americans each year, sends about 25,500 to the hospital and kills more than 500 people. While there is no 100% guarantee on protecting yourself from eating contaminated meat, in addition to their report of chicken, Consumer Reports offered some chicken safety tips:

BA.2: What We Know So Far About The Omicron Subvariant