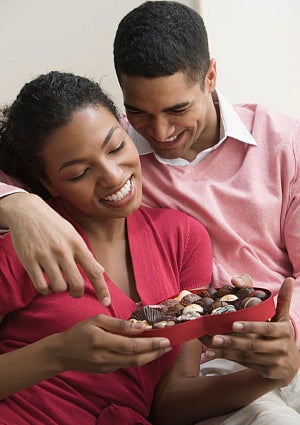 As you snuggle up to celebrate your love on Valentine’s Day, scientists want you think to about deeper matters of the heart. Love, after all, is all about chemicals, reports CNN. “Part of the whole attraction process is strongly linked to physiological arousal as a whole. Typically, that’s going to start with things like increased heart rate, sweatiness and so on,” said said Timothy Loving, an assistant professor of human ecology at the University of Texas, Austin. The brain responds to love by sending out signals to “the adrenal gland, which secretes hormones such as adrenaline, epinephrine and norepinephrine.” Which could explain your faster heart rate when seeing someone you’re attracted to. A study conducted at Rutgers University found that people in love tend to produce the chemical dopamine, which “gives you that focused attention, the craving, the euphoria, the energy and the motivation, in this case the motivation to win life’s greatest prize,” said Helen Fisher, the Rutgers University professor who conducted the study. Her team also found what love songs have been telling us for years, romance doesn’t have to die. The study found that the brain activity of people who’d been together for 20 years was the same as those who had just fallen in love. Most surprisingly, it turns that love can be dangerous for people with heart disease because it raises the heart rate and the heart needs more oxygen, said Dr. Reginald Ho, of the Thomas Jefferson University Hospital in Philadelphia, Pennsylvania.